Tacoma council to vote on $150M complex with hotel and housing 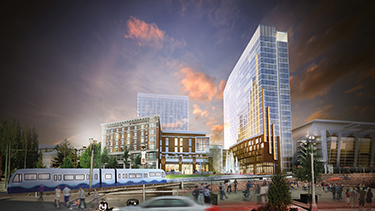 The Tacoma City Council is expected to vote tonight on an agreement that would pave the way for developing two 240-foot towers near the Greater Tacoma Convention and Trade Center.

Shanghai Mintong Real Estate Co. and its local subsidiary, Yareton Investment & Management in Des Moines, have proposed the towers for a site with about two acres.

The deadline to start construction on the hotel is two years from the day all parties have signed the development agreement.

Construction on the hotel is expected to take about two years.

The second tower will be built later, depending on demand. It will have at least 200 condos or apartments, 20,000 square feet of retail and more than 200 parking spaces.

Albert Sze, project manager for Yareton, said the tower will likely be apartments, but could be converted to condos.

“The Tacoma housing and apartment market has just started to get its feet under it,” Sze said. “We want to see what the needs are a couple of years down the road.”

Yareton and Shanghai plan to work with UW Tacoma to see if the housing could accommodate staff and students. Sze said there could be student housing or meeting spaces for students to rent, as well as an international food court.

In a staff memo, Ricardo Noguera, director of Tacoma's Community and Economic Development Department, called the project a “game-changer” for downtown Tacoma that will create 1,000 new construction jobs and 200 full-time jobs, and allow the convention center to attract larger events.

“It would be the largest project at least within in the last two decades,” Walkowiak said. “It is a significant catalyst to downtown revitalization.”

After the agreement is signed, the developers have five months for a feasibility study, and 18 months to design and get permits for the project.

Sze said the planning period is longer than usual because Shanghai and Yareton are new to this market. Construction could start before the end of the two-year period set aside for due diligence and permitting.

Sze said the project team is still being assembled. Ankrom Moisan Architects has done some feasibility and conceptual design work.

Before construction can begin, the developers must have an agreement with a four-star hotel operator and proof of financing for the hotel phase.

The estimated cost for the hotel is $85 million. The development agreement says at least 40 percent of that, or about $34 million, must be covered by equity.

Once the agreement is signed, the developers must give the city quarterly progress updates.

The developers are planning to use federal EB-5 money to finance part of the project. The EB-5 program allows people to obtain green cards and a path to American citizenship if they invest at least $500,000 in qualifying real estate projects.

Sze said EB-5 money could make up about 30 to 40 percent of the cost of the Tacoma project.

Shanghai and Yareton already have one EB-5 project in the area: a hotel in Des Moines that is under construction and scheduled to open next summer.