Spectrum gets OK for its third apartment project on First Hill 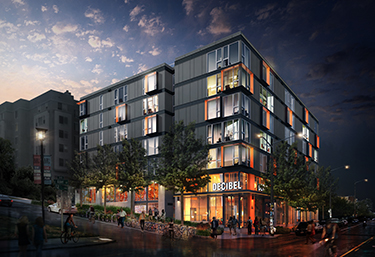 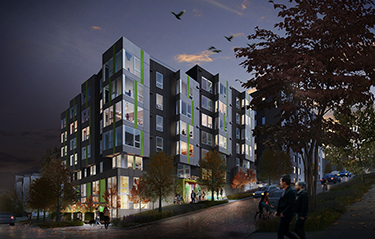 [enlarge]
Construction is set to begin in April on Reverb, an 85-unit building at 1023 E. Alder St.

The project was in jeopardy earlier this year when the city wanted to condemn the site for a pocket park. But the city later dropped that plan, allowing Spectrum to move forward with Reverb.

Spectrum's first project in the neighborhood is a 120-unit structure at 103 12th Ave. called Anthem on 12th. It is under construction and set to open in May.

The other project is Decibel, a 75-unit complex at 301 12th Ave. Decibel got design approval in October, and construction is set to begin in March and finish in April 2016.

The names were chosen to honor guitarist Jimi Hendrix, who once lived at Yesler Terrace.

There will be a total of 280 apartments in the three buildings, and 62 will be affordable units. Spectrum is participating in the city's Multifamily Tax Exemption program for all three buildings.

Spectrum is also participating in the city's incentive zoning program for Reverb, which will allow Spectrum to add five units for people making less than 80 percent of area median income.

Gracorp Capital Advisors is the financial partner on the three buildings. Mithun is the architect and Hewitt is the landscape architect. Walsh Construction Co. is the general contractor for Anthem and is doing pre-construction services for the other two.

The complexes are a few blocks from a stop on the First Hill Streetcar line. Anthem has been billed as the first private development project in Yesler Terrace; Decibel and Reverb are about two blocks north.