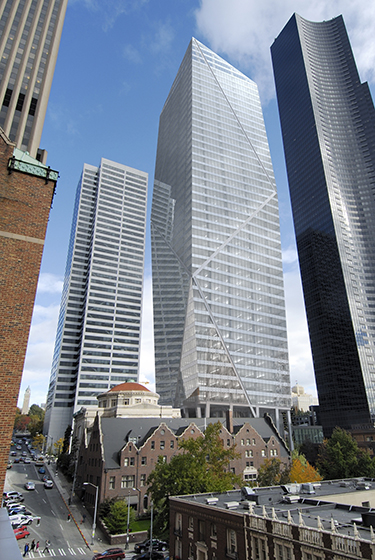 Daniels Real Estate paid $5.04 million to The Rainier Club for the air rights to build the 44-story Fifth + Columbia tower above it, according to public records.

“We are pleased to announce an agreement for development rights that will enable The Rainier Club to begin construction this winter on its largest addition in 85 years, which will include a new health club facility and underground parking for club members and their guests,” Kevin Daniels said in a release.

Daniels said the Fifth + Columbia team will be headed by ZGF Architects and JTM Construction, the same companies that designed and built his Stadium Place near CenturyLink Field.

Daniels Real Estate and financial partner Stockbridge Capital Group LLC have started shoring work for Fifth + Columbia and expect to have the tower finished in spring 2017.

A ZGF partner in 2013 told the DJC that the team decided to “tip” the edges of the building outward over The Rainier Club and former First United Methodist Church sanctuary that Daniels and Stockbridge bought in 2008. The design will give it unique angles and larger floor plates.

Daniels says the future use of the church will be announced when Fifth + Columbia breaks ground next spring.