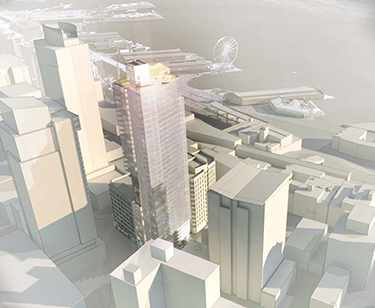 The Wood Partners project is a 230-unit apartment building at the southwest corner of Second Avenue and Stewart Street near Pike Place Market.

It would have 1,000 square feet of street-level retail and parking for 140 vehicles on four levels below ground and six levels above ground.

Hewitt is the architect.

An early design guidance meeting with the city is scheduled for 7 p.m. Jan. 20 in Room L280 at Seattle City Hall.

The site includes a pair of century-old buildings: the two-story Ames/MJA Building and the 10-story Broadacres Building, both owned by entities related to Principal Global Investors of Des Moines, Iowa.

The Seattle Landmarks Preservation Board separately considered — and denied — nominations for the buildings earlier this year.

Wood Partners approached the city with a proposal for a 400-foot tower, with an option for it to cantilever over the Broadacres Building.

The “preferred” design by Hewitt, filed with the city, shows a slight cantilever above the 16th floor but otherwise leaves the Broadacres Building unaffected.

The preliminary design by Weber Thompson calls for 500 residential units,17,000 square feet of retail and parking for 450 vehicles.

Holland has been very busy in South Lake Union in recent years.

Last year the firm paid $79.5 million for 14 parcels on 5.5 acres between Westlake and Dexter avenues North.

Holland purchased a 1.43-acre site at 810 Dexter Ave. N. in May for an eight-story building with 362 apartments.