The long-time Seattle economist — who does a lot of work in the housing market — thinks the dramatic price increases will continue this year and possibly for the next few years because inventory remains tight.

But he notes that the really big jumps are mainly in “close-in Seattle” — particularly places like Queen Anne and Capitol Hill — due to all of Amazon's hiring and the additional fuel when Expedia moves its offices to Amgen's former campus at the south end of Interbay.

Across the metropolitan area prices haven't and won't climb so steeply. Those locations are in fact still affordable, he said.

Well, these close-in price hikes are starting to get into OMG territory so Crib Notes asked Gardner, who is principal of Gardner Economics, and some other experts to answer this question: When does this stop, and how?

These increases can't keep going. It's not natural, not sustainable. A huge question on a lot of folks' minds is: Will this end with a “soft landing” or something more like a slam down? You know, like something bursting? 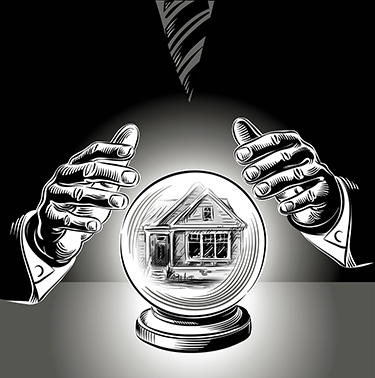 We're all still shell-shocked and wary about the way everything got creamed in 2007 and 2008 — and stayed that way until about the end of 2011. That was brutal and not, please the gods, to be repeated.

Crib Notes wrote a year ago: People, it's a boom, not a bubble, because there isn't the crazy-bad lending, appraising and non-regulation now that stoked THAT bubble.

But dang, does “It's just a boom” still hold true? How about that recently headline saying Seattle's median home price rose 18.9 percent from March to March, to a hefty $535,000. Really, 18.9 percent! Toss some exclamation points on that!!!

(But let's toss some smarts on that, too. It made for a killer headline, but that's just the month of March 2015 compared to activity in March 2014. So many variables can easily dishevel such a limited look at the stats. Here's one: How about exceptionally great home-buying weather in March 2015?)

Real estate always goes in cycles though. It goes up; it goes down, though usually not down as much as it went up.

So what will our inevitable cool-down look like? And when will it be? Most everybody hopes for a “soft landing,” as in prices stop shooting upward but don't go downward.

Some people Crib Notes queried point out that it's quite hard to predict this part.

Gardner made a key point: The crazy lending that fueled the last big bubble and burst is not happening this time. “There isn't any subprime now,” he said.

The science of it starts with income levels. If incomes climb enough to support the higher monthly house payments created by these big fat house prices, then they are sustainable. If prices rise too high, then the market corrects.

Gardner reports that the Seattle metro area reached a nice 4.8 percent unemployment level by the end of 2014. He forecasts it will drop to a mere 3.9 percent by the end of this year.

“We forecast close to 48,000 new jobs in the metro area this year,” he said. “Seattle remains one of the best locations relative to potential growth in 2015. We still have some potential for prices to move higher without a bubble forming.”

The first force to slow things down likely will be when the Fed raises interest rates. That has been predicted to happen for at least the past two years. Gardner said he sees rates starting to climb in the second half of this year — reflecting what the Fed says, by the way. The Fed also says it'll happen gradually, in an effort to create that soft landing.

The result of all this price run-up is more stratification between the wealthy and the rest. The haves and the have-nots. There will continue to be plenty of haves who can afford to live close-in, while the rest will increasingly need light rail and mass transit to get to their close-in jobs and restaurants.

We have role models for this: San Francisco, San Jose, New York, LA, Chicago. They stratified long before this. Darned great cities, by the way.

So through Gardner's eyes the current conditions — “tight inventory,” “seller's market,” “multiple-offer situations” — which we've had now for three years straight seem like they'll be with us for quite a while.

Interest rates are “the first force.” But the worst force would come from an unexpected cataclysm. And, well, those don't get predicted. They're sort of “the expected unexpected.”

Eyes turn to Amazon. Is it still in its youth? Lots of economic juice left there? Crib Notes thinks so, and so does Gardner. We know about Boeing cycles, and Boeing is still big — nay huge — here.

Microsoft? Starbucks has things dialed in. Even an Amazon hiccup would give in-close some indigestion.

Prices were rising. Speculation had set in. The bursting of the savings-and-loan bubble was over. Multiple offers on homes had become a norm, like now.

This area and the country went into a recession by mid-1991. But a mild, short one compared to the recent Great Recession. No billboards went up saying “Last one leaving turn out the lights.”

“Prices dropped about 10 percent,” Grimm recollects. “The bottom did fall out.”

“The people now who are paying 20 percent over the asking price (when that happens) are saying they're willing to give up future appreciation to get something now,” Grimm said.

“All markets reach their equilibrium,” Grimm said. “This one will too. There's a tipping point.”

We're not there yet.