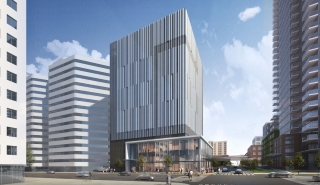 Today Clise Properties will present its latest plans for a data center at Sixth Avenue and Bell Street in the Denny Triangle.

The updated design shaves a couple of stories from the original 11-story, 165,000-square-foot proposal.

The new design has just nine stories and a 40-foot-high base containing retail and office space. The architects at Graphite Design Group said these changes will make for a better scale along Bell Street.

It was not clear in design documents what the square footage would be but the current description from the city is 133,000 square feet.

A Seattle design review board will give its recommendations at a 7 p.m. meeting in Seattle City Hall, Room L280.

Much of the structure would be a windowless storage space for computer systems and associated components, such as data storage. It would have redundant data communications connections, environmental controls and security devices.

Just 30 people would be housed on site to run it all.

A 56-stall parking lot is slated to be demolished to make way for the project. The new building would have indoor parking for 29 vehicles.

Ground-floor retail is planned at the corner of Sixth and Bell, and the office lobby would be on Sixth. Canopies will wrap around the building to protect pedestrians from the elements.

The exterior would be covered with a “sculptural” metal-paneling system with random patterns.

The site is just a block west of Amazon.com's burgeoning Denny Triangle campus, so the complex would be well suited to serve the online retail giant.

Amazon is already working with Clise to construct a district energy system that will pipe heated water from a different data center at 2001 Sixth Ave. into an Amazon tower now under construction at 2021 Seventh Ave. Hot water will heat buildings on the Amazon campus and then return to the data center much cooler.

Clise has said it plans to have a water-based heating system in the new data center, but hasn't announced whether Amazon wants to use the new building.

Clise is also planning a 39-story apartment tower at 2202 Eighth Ave. and a pair of 40-story office and residential towers at 2301 Seventh Ave.