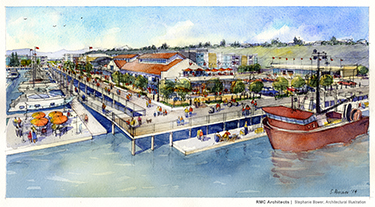 Image by Stephanie Bower/RMC Architects [enlarge]
Plans call for up to 204 apartments on Seiner Drive near 14th Street and West Marine View Drive.

The Port of Everett released its first request for qualifications from developers to build housing at Fisherman's Harbor, part of the port's $373 million mixed-use development called Waterfront Place Central.

Plans call for up to 204 apartments on Seiner Drive near 14th Street and West Marine View Drive. Construction could begin in 2016 or 2017.

The RFQ is online at www.waterfront-place.com. Qualifications are due in October, and the port hopes to have a developer on board by the end of the year.

Fisherman's Harbor is the first phase of the 65-acre redevelopment. Other neighborhoods are planned, including the Craftsman District, Millwright District, Wharf's Edge and the Esplanade.

The 5.6-acre Fisherman's Harbor will eventually be a year-round hub of activity that could also include a 120-room hotel, five commercial buildings, retail and waterfront restaurants. Public features will include a trail, floating “activity barges,” a “dock walk” where visitors can touch the water, a large park and a small boat course.

The port is serving as master developer.

Terrie Battuello, the port's chief of business development, said on Friday that the port has received unsolicited proposals for the commercial space, and would like to hear from more developers.

Another $33 million would be spent on infrastructure projects.

PND Engineering and Miller Hull Partnership were selected in February to design the first phase of the public infrastructure. The $3 million contract includes design of infrastructure and reviewing private projects.