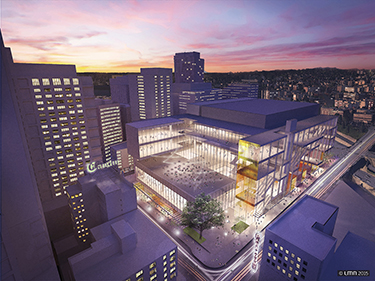 The Washington State Convention Center released new images of its proposal for a 1.2 million-square-foot expansion.

The site is between Pine and Howell streets, and Ninth and Boren avenues.

Including land, the project is estimated to cost $1.4 billion.

The co-development sites will be permitted and then sold to private developers to help pay for the addition, according to Matt Griffin of Pine Street Group, which is development manager for the project.

The sites won't be sold until design and permitting are complete, which could take six months to a year.

LMN Architects is the architect and Pine Street is the GC/CM adviser.

(Editor's note: This article has been changed to correct the name of the GC/CM adviser.)

Construction on the expansion is set to begin in 2017, with completion set for 2020.