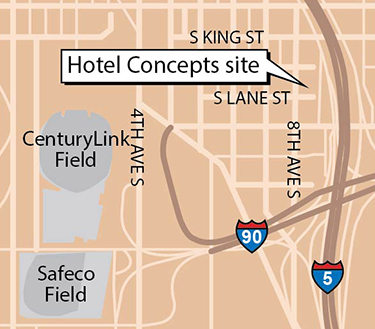 Seattle-based Hotel Concepts is eyeing a 14-story hotel and residential tower at 616 Eighth Ave. S. in the International District.

The project could have 168 hotel rooms, 100 apartments, and up to 30 condos, said Han Kim, a partner at Hotel Concepts.

The maximum height for a hotel or office building on the site is 75 feet. Adding housing units would allow a structure up to 150 feet.

Hotel Concepts wants to begin construction as soon as it gets through the city permit process.

The company's website says the International District project will be a SpringHill Suites by Marriott.

Kim said the apartments will be market-rate but small to keep the rents low, and parking will be minimal.

An entity related to Hotel Concepts paid $4 million for the nearly half-acre site.

Hotel Concepts has 14 hotels in this area and one in Hawaii. Several others are planned or under construction.

The company has traditionally developed only hotels, but it is beginning to branch out into residential. In addition to the International District project, the company is seeking permits for apartment projects in Olympia and Des Moines. A report from the Downtown Seattle Association says the city has more than 14,000 hotel rooms downtown.

So far this year, two hotels totaling 394 rooms have opened. Three other projects with 623 rooms are under construction and expected to open in 2016 and 2017.

DSA says there are 17 hotel projects in early stages of development, and seven of those include some housing units. If all these hotels are built, they would add 4,166 rooms downtown.