We remember when Tutta Bella pizzeria opened in (gulp) Columbia City. A Starbucks too. Pioneering businesses, taking a risk.

That was about 15 years ago. Flash to now: the diverse neighborhood in southeast Seattle is fully and officially popping. Especially the retail around Rainier Avenue!

So this means it's time for us to talk about the G-word: gentrification.

As Columbia City keeps gentrifying — and yes, there's a lot more to come — so will Hillman City as it catches the spillover.

Gentrification, as we all know, is a loaded word. It takes on different meanings and evokes different emotions depending on which lens we use to view it. 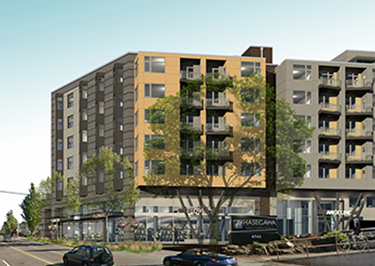 It's bittersweet for many. Displacement eventually will happen. Slowly but surely. Southward, to Hillman City, Rainier Beach, Renton, then Kent. Cities don't stand still. They change, and then change again.

Several benchmark changes stand out in Columbia City: The one-time run-down African-American bar named Angie's is now revamped and reopened as Salted Sea, a tony seafood restaurant and “raw bar.” (We believe that means raw oysters). It's across Rainier from Vino Verite and the Royal Room, a music club.

The biggest redefining change hit this summer when The Angeline opened. It's a gorgeous, 25,000-square-foot PCC grocery store topped with 193 apartments. Security Properties is the developer, and it was designed by Bumgardner Architects and built by S.D. Deacon.

The six-story complex filled what had been a sea of asphalt around a small, sad, one-story former retail center built in the 1950s.

Rents in The Angeline range from $1,600 to $3,400 per month. Yep, in Columbia City. Some units go for less, subsidized by the city's mutifamily property tax exemption designed to create some affordable housing.

Light floods into the PCC through a western wall of glass, and doors open onto a large plaza with tables where you can eat the food you've harvested from the deli. The plaza flows pleasingly into the linear Columbia Park.

The PCC also advances what's becoming a pleasant pedestrian promenade along South Edmunds Street, from the light rail station at Martin Luther King Jr. Way on the west to the PCC and Rainier Avenue on the east. South Alaska Street runs parallel to Edmunds a block to the north, but it's not a pleasant place to walk. Edmunds is. 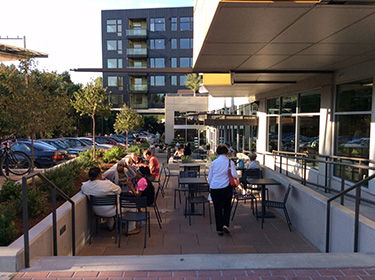 [enlarge]
The PCC opens onto a large plaza with tables, and the plaza flows into Columbia Park. A pleasant pedestrian promenade is forming along South Edmunds Street.

At 20-minute intervals on weekday evenings another flock of pedestrians flows east along Edmunds from the light rail station. They head back to the station the next morning. Food vendors now cluster near Edmunds and 32th Avenue South.

The walkers flow past the 6-acre site where Zion Preparatory Academy once stood. The Wolff Co. now is building 244 apartments there.

Two blocks to the south is the 124-unit Greenhouse Apartments, which opened in 2012 as the first new market-rate apartments in Columbia City in 40 years. Talk about a redefining change. Greenhouse units have granite countertops and high ceilings, and there's a deck on the roof. It replaced a weathered warehouse for a plastics plant.

East of Greenhouse, facing Rainier Avenue, sits a drab 14,000-square foot warehouse with the L.E.M.S Bookstore. It's for sale, and the asking price is $2.85 million. The listing broker, Ray Akers of Lake & Co., said three buyers have submitted offers.

Akers said he expects the winning bidder will build six stories of housing over retail there. The property is zoned C2-65.

South of that, edging toward Hillman City, a Seattle developer owns another large industrial parcel on the west side of Rainier Avenue. The investment group bought before the recession and have held on for years waiting for the change that's now washing through.

Akers bought and spruced up an old historic home in Columbia City 20 years ago and has been there ever since: “I've lived and breathed all of the revitalizing.”

He has a strong opinion about another recent change in Columbia City: This summer's reduction of Rainier Avenue at Columbia City from four lanes to three. That's called a “road diet.” One lane south, one north, with a turn lane in the center. To improve safety.

Another dangerous 4-laner, 23rd Avenue through the Central District, is getting a “road diet” too, but the city is reshaping it with months of construction, new curbs and wider sidewalks. In Columbia City the city basically just painted new stripes on Rainier.

“We need real new infrastructure (on Rainier), not new paint,” Akers said. “The right solution is the right investment.”

Redevelopment happens in waves, and cycles, with recessions in between. Each cycle lasts about 10 years in Seattle, mirroring Boeing's boom-bust cycles. This cycle is Columbia City's. Hillman City still is one or two cycles out.