2 big sites are up for auction soon 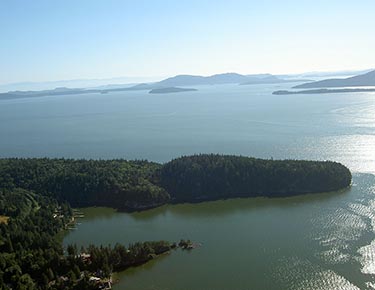 Courtesy Cushman & Wakefield | Commerce [enlarge]
Governors Point is six miles south of Bellingham, with 125 acres along the waterfront. Up to 25 houses could be built there.

Two large sites for new development will be auctioned off next month.

The properties are Governors Point, a 125-acre waterfront residential site south of Bellingham, and a 320-acre site in the Lewis County town of Winlock, which is about 100 miles south of Seattle and 75 miles north of Portland.

Up to five million square feet of industrial distribution space could be built on the Winlock property, said Douglas Johnson, managing director of CBRE Auction Services, which is handling both auctions.

Johnson said 25 houses could be built on Governors Point, which is six miles south of Bellingham, on Samish, Pleasant and Chuckanut bays.

“(Governors Point) is, in my opinion, one of the most spectacular sites being offered in the United States at this time,” Johnson said. The Governors Point auction is Oct. 8 at Hilton Seattle Airport & Conference Center, 17620 International Blvd. The opening bid is $3.5 million.

The Winlock auction is set for Oct. 13 and will be online only. The opening bid is $2.5 million.

More information on both properties is at www.cbre.com/auctionservices.

The Sahlin family owns Governors Point and put it on the market about a year ago. In May, court records show four entities run by Roger Sahlin filed for bankruptcy. Johnson said the Sahlin family approached CBRE to do the auction with approval from U.S. Bankruptcy Court of Western Washington.

Johnson called the industrial site in Winlock the “largest privately owned land opportunity in the Pacific Northwest.” Benaroya Capital Co. was the lender on the property and then took it back from the owner, Johnson said. Now Benaroya wants to sell.