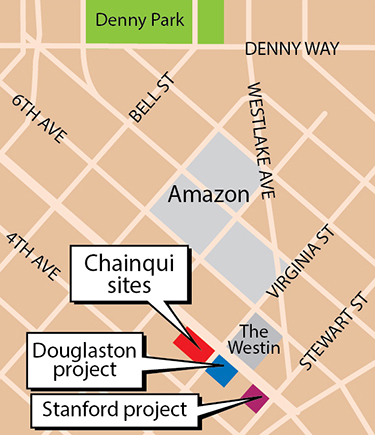 An entity related to a publicly traded Taiwanese firm called Chainqui Development has purchased a third parcel along Fifth Avenue, between Lenora and Virginia streets.

Michael and Jodie Griffin are listed as the sellers.

In January, Chainqui paid $20.7 million, or $1,597 per square foot, for two adjacent parcels where the 57-unit Sheridan apartments and a parking lot now are located.

Chainqui also owns a site at 2401 Third Ave. in Belltown where a U.S. Bank branch is today. Early permitting documents show Chainqui is considering putting a 12-story tower there with 110 residential units and 5,000 square feet of retail.

It is unclear what Chainqui plans for the Fifth Avenue sites, and nothing has been filed with the city for any of those parcels.

LNL Design's website says it has worked on large projects in China.

Both firms' websites say they have the same principals. Attempts to reach them were unsuccessful.

Prices have soared for development sites along Fifth Avenue. In September 2013, Stanford Hotels Corp. paid $16.75 million, or $1,292 per square foot, for a site one block south of Chainqui's, and is planning a 50-story tower there with a hotel and housing.

In June, Douglaston Development of New York paid $16 million, or $988 per square foot, for three parcels on the same block as Stanford's project and across Virginia Street from Chainqui's properties. Douglaston is planning 45-story hotel and apartment tower.