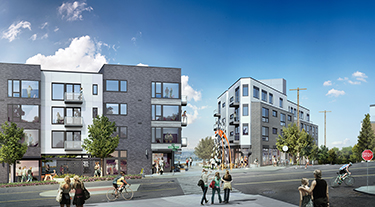 Seattle developer Daly Partners said in a statement that the project will create a new through-block path for Howe Street that will help connect I-5 Colonnade Park with the Cheshiahud Lake Union trail.

Both buildings will be four stories. One will be located north of Howe Street and the other will be south of Howe.

The architect is Bushnaq Studio, and W.G. Clark is the general contractor.

Apartments will include a mix of 32 studios, 52 one-bedroom units and seven two-bedroom units. Five live-work units are planned, and two commercial spaces that will total more than 3,000 square feet. Underground parking for 64 vehicles will be available off Yale.

Commercial tenants will include a locally owned restaurant, according to Daly.

The buildings will have multiple courtyards and articulated entries to create a layered streetscape. Large windows on the street and courtyard-side units bring in light throughout the day. A rooftop deck will offer views of Lake Union and the Seattle skyline.

The project is slated to be finished in the fall of 2016.

Daly Partners completed ‘N' Belltown, Seattle's first modular apartment in 2014. The developer is working on several other projects, including the 65-unit Dexter Hayes apartments near South Lake Union, the 100-unit Etruria on Queen Anne, and projects in the Central Area and University District.