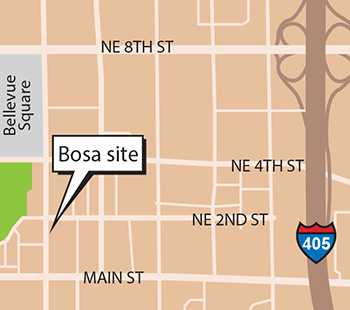 An entity related to the Canadian firm Bosa Development bought two parcels in downtown Bellevue where it is contemplating a 21-story residential tower.

King County property records show the Burnaby, B.C.-based condo builder paid $22.8 million, or approximately $436 per square foot, for the parcels, which are at the southeast corner of Bellevue Way Northeast and Northeast Second Street. The site is kitty corner to Downtown Park.

The seller is the Bates family, which has owned the site for 74 years. Two fully leased retail buildings are there now.

Mark Anderson and Mark McFadyen of Colliers International marketed the site for the seller.

In March, Bosa presented a potential project on the property to the city of Bellevue. City records show the plan called for a tower “surrounded by” a four- or five-story podium. That plan also included underground parking and 20,800 square feet of commercial/retail space.

The documents describe a building that would have an angular shape created by balconies of different sizes and shapes. Public plazas at street level would emphasize the shape of the building, and provide space for restaurants and cafes.

Amanat Architect of Vancouver, B.C., is listed on project documents.

Bosa is finishing Insignia, a condo complex in Seattle that has two 41-story towers with a total of 707 units on the block bounded by Fifth and Sixth avenues and Bell and Battery streets. Residents began moving into the first tower in July. The second tower is on track to open next summer.