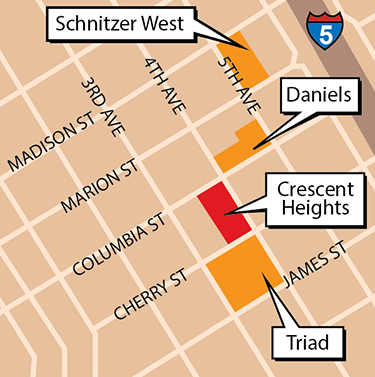 An entity related to Crescent Heights Inspirational Living of Miami paid $48.75 million for half a block at 701 Fourth Ave. where it's planning a 1.2 million-square-foot, mixed-use tower.

The seller is the Costacos family. The price works out to approximately $1,707 per square foot for the two parcels, which today are home to a pair of parking garages.

Notes from a Sept. 9 meeting with the city indicate that Crescent Heights would like to begin construction in 2017.

City records do not say how tall the tower would be, but show that office and retail space will be in a podium with housing above.

Crescent Heights entered the Seattle market a year ago when it bought four parcels in the Denny Triangle for $18.5 million, or approximately $660 per square foot. The firm later proposed two 39-story apartment towers on the site at 1901 Minor Ave.

The Denny Triangle and Fourth Avenue parcels are similar in size.

Several development sites have gone for high prices in the last few months. An entity related to a publicly traded Taiwanese firm called Chainqui Development last week paid $12.99 million — approximately $2,005 per square foot — for a small corner lot at 2005 Fifth Ave. In January, Chainqui paid $20.7 million — or $1,597 per square foot — for two adjacent parcels where the 57-unit Sheridan apartments and a parking lot now are located.

In September 2013, Stanford Hotels Corp. paid $16.75 million — or $1,292 per square foot — for a site one block south of Chainqui's, and is planning a 50-story tower there with a hotel and housing. At the time, Janet Backus of NAI Puget Sound Properties, who marketed the property for sale, told the DJC the per-square-foot price was one of the highest for land in recent memory.

In June, Douglaston Development of New York paid $16 million — or $988 per square foot — for three parcels on the same block as Stanford's project and across Virginia Street from Chainqui's properties. Douglaston is planning a 45-story hotel and apartment tower.

Two other major projects are being developed near the property Crescent Heights just bought on Fourth Avenue. The Mark, a 44-story office and hotel tower, is under construction at Fifth and Columbia by Daniels Real Estate and Stockbridge Capital Group. Schnitzer West is constructing the 37-story office tower Madison Center at Fifth and Madison.

Triad Development has long planned to develop a 42-story, mixed-use tower on the block south of Crescent Heights' site, but that project has been stalled for years.