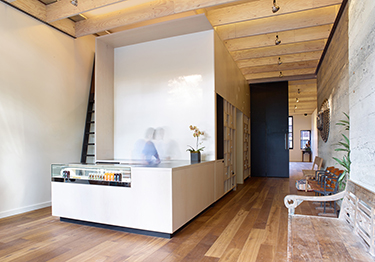 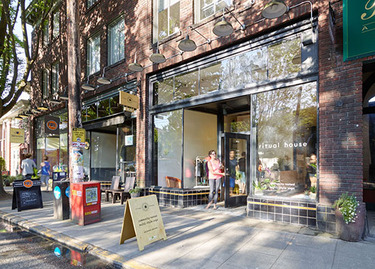 The weathered brick storefront opens up to a 1,350-square-foot interior with a 40-person yoga studio, two changing rooms, check-in desk, retail and a space for transitioning between classes.

The architect was goCstudio. Thomas Fragnoli was the contractor. Other team members include J Welch Engineering (engineer) and Coruscate Lighting Consulting (lighting).

The long, narrow open plan was divided with one central organizing structure. The box-like structure creates a check-in desk at the front and storage lockers and bathrooms on the side. The structure is made of a plywood box that hovers between the exposed rafters and oak floors.

A large sliding wall separates the studio space from the front of the house, with a smaller pilot door that allows latecomers to slip into class without disturbance. Between classes, the wall slides back to allow more students through.

LVL wood rafters were added and lined with LED lighting strips to create a soft glow along the ceiling. The rafters can accommodate structural load, so they can be used for aerial yoga and hanging display racks.

Construction revealed an old cast-in-place concrete wall, which was hand scraped and sandblasted over three days to take off a hundred years' worth of plaster and paint.