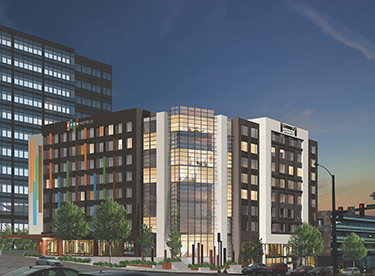 InterContinental Hotels Group yesterday announced that it and Noble Investment Group will be joint venture partners for two hotels planned in one building near Amazon.com's headquarters in South Lake Union.

The nine-story building at Mercer Street and Fairview Avenue North is expected to open in mid-2017 with a 123-room Even Hotel and a 112-room Staybridge Suites hotel. The DJC earlier this year reported that Even will face Fairview and Staybridge will face Mercer.

“We are excited to build on our relationship with IHG and together deliver this Even Hotels and Staybridge Suites dual-branded property in a true gateway American city,” said Noble CIO Rodney Williams in a news release. “The South Lake Union area of downtown Seattle is a dynamic confluence of medical, corporate and leisure demand anchored by the expanding global headquarters of Amazon.”

Even Hotels have a health and wellness theme and Staybridge Suites are designed for extended stays, with a laundry and kitchen in each room. Both are IHG brands.

IHG describes the Seattle Even Hotel as having a “natural and modern design, bringing the outdoors in.” There also will be 2,000 square feet of meeting space, an outdoor garden and an athletic studio.

Even Hotels' website says it puts a fitness area and exercise equipment in each hotel room, and guests can use a mobile app to help them get a better workout. Staff also will give advice about walking and running routes.

The Seattle Staybridge will be a mix of studio and one-bedroom suites.

IHG said this will be the first Even Hotel on the West Coast and the third Staybridge Suites in the Seattle area. It also said putting two hotels under one roof allows for operating and building efficiencies, but doesn't compromise the distinctly different hotels.

An IHG representative didn't respond by press time to an inquiry about the project's development team. The DJC previously reported that early design documents listed Murphy Varey PS of Seattle as the architect and applicant. Jonathan Nehmer + Associates of Rockville, Maryland, an architecture firm that specializes in hotels, was also named in documents.

Even Hotels opened its first two properties in 2014 in Connecticut and Maryland. It has an additional six properties in the pipeline, including two in midtown Manhattan and one in Brooklyn, New York.

Staybridge Suites first opened in 1998 in Georgia and now has 216 hotels across the Americas, Europe and the Middle East, and more than 100 hotels in the pipeline.

Atlanta-based Noble invests primarily in lodging and hospitality through its private equity real estate funds. It has no holdings in Washington, according to its website.