Three high rise towers are planned on the same block in South Lake Union, and it's likely they won't all get built.

The block is on the north side of Denny Way between Terry and Boren avenues north. Mack Urban is planning a 43-story tower on the northwest corner of the block, and H5 Capital of Beverly Hills, California, is planning a pair of 41-story residential towers.

City rules only allow one tower per block front and a maximum of two towers per block in South Lake Union, said Dennis Meier, a strategic advisor for Seattle's Department of Planning and Development. Meier said the firm that receives its master use permit first can dictate what happens on the block. If Mack Urban gets its permit first it could build its tower on the block, and H5 would have to change its plan from two towers to one, Meier said. If H5 is the first to get its master use permit, Mack Urban may not be able to build its project as planned, Meier said.

“For both projects to continue as they are currently planned, that is going to create a conflict with the one tower per block front provision,” Meier said. 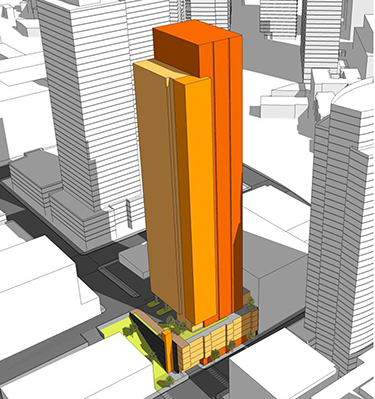 Courtesy CollinsWoerman [enlarge]
Mack Urban wants to build a 42-story tower with approximately 430 apartments on the northwest corner of the block. 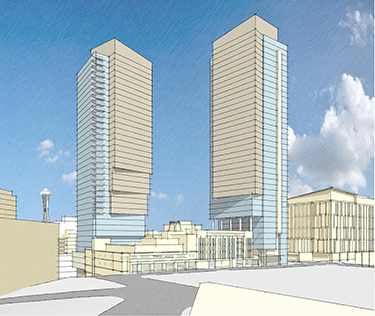 Courtesy VIA Architecture [enlarge]
H5 Capital plans two 41-story residential towers with a combined 810 units. Both images are massing studies, which indicate the approximate size and volume, but not the final design.

The two firms are in similar places in the permitting process. Both own the land where they propose to build. Mack Urban had its first design review board meeting Sept. 30, and H5's first one was set for last night.

Josh Simms of H5 declined to comment, and representatives of Mack Urban did not return phone calls requesting comment.

Paul Keller, Mack Urban founding principal and CEO, wrote to DPD in a comment on H5's early design guidance proposal that H5 has not presented a fully code complaint option in its design review packet. Keller argued in the letter the three massing options in the design review packet are all the same, and the project fails to respond to the surrounding urban context. Keller in his letter said he believes H5 should have to go through a second early design guidance meeting with a code complaint option and three different massing options.

Mack Urban's project received letters of support from surrounding developers like Onni Group, Holland Partner Group and Vulcan Real Estate and the South Lake Union Community Council. Keller told the DJC last month that Mack Urban had reached out to neighboring property owners like Holland and Onni to talk about the project.

Mack Urban's project would have approximately 430 apartments, 2,800 square feet of retail and 300 underground parking spaces. CollinsWoerman is the architect on the project.

H5's two-tower project would have a combined 810 units, 9,500 square feet of retail space and 384 parking spaces. VIA Architecture is designing H5's project.

The 86-year-old Seattle Times building would remain on the block, along with a smaller 1960s addition on the southeast corner of the block. Both buildings received seismic retrofits and other substantial improvements in 2003.

A neighboring single-story structure to the north that houses 13 Coins Restaurant would be demolished for H5's project.

Meier said the two-tower-per-block provision is unique to South Lake Union. Downtown areas have no such rules but do require gaps between towers. If multiple firms want to build on the same block in ways that don't comply with tower spacing rules they can ask the planning director for an exception. In South Lake Union, that is not possible, Meier said. He said one of the developers could seek a variance and claim the rules restricting the number of towers allowed on a block cause a hardship. “But that would be a hard case to make,” Meier said.

Gridiron getting ready for kickoff

Earlier this week one of my colleagues took a walk by CenturyLink Field and noticed some activity at the century-old Seattle Plumbing Supply building where Daniels Real Estate is proposing to add 107 condos.

So does that mean it is kickoff time for the project called Gridiron? Not quite yet, says Kevin Daniels of Daniels Real Estate.

Crews are doing some environmental remediation on the site, but Daniels hasn't obtained the building permits to start construction yet. Daniels said the city is ready to issue those permits as soon as the project makes it through the Pioneer Square Preservation Board. The project has received preliminary board approval, but it still has to get the final OK, Daniels said.

Daniels said he hopes to go in front of the board later this month.

Daniels' project will add seven levels of housing plus a rooftop amenity deck to the 111-year-old structure. The ground floor and mezzanine level will have 9,700 square feet for separate restaurant and bar spaces.

Daniels previously told the DJC the project would open April 2017, but the delayed review has put the project about a month behind schedule.

About 543,000 square feet of that was in the Puget Sound region. Patrick Gemma, senior vice president at DCT's Seattle office, said developers haven't built enough industrial space to keep up with demand nationwide, and companies are scrambling to lease what is available.

“The last 90 days are probably as strong of a leasing market as I have seen in my career,” Gemma said.

Gemma would not name the tenants leasing space in DCT's buildings. He said they include distribution and manufacturing companies and Boeing suppliers.

In the Puget Sound region, DCT has a two-building complex in Fife under construction that is set to open by the end of the year. One building will be 240,000 square feet and is fully leased. The other one will be 152,000 square feet, and so far 85,000 square feet has been leased.

Over the last two-and-a-half years, DCT has built approximately 1.5 million square feet of industrial space in the Puget Sound region. About 92 percent of it has been leased, Gemma said.

Gemma said DCT is looking for more projects in the region.