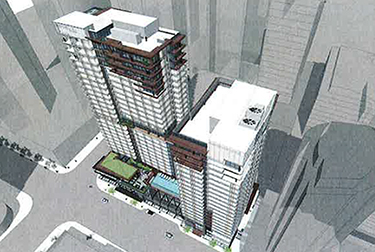 An entity related to Fana Group of Companies is planning a phased project with nearly 1.2 million square feet of mixed-use space in downtown Bellevue.

According to city of Bellevue permitting documents, the first phase of the project includes a 27- and 22-story tower with a combined 270 residential units and a hotel at 320 and 350 106th Ave. N.E. The housing will be upper middle to high income.

Permitting documents show Fana is contemplating building office or residential structures for the later phases. If the future phases are both residential, they could have a combined 267 to 436 units.

The first phase (shown in the image above) could be finished by spring 2018, according to permitting documents.

“The needs of downtown Bellevue,” will determine timing of future phases and whether the buildings will be office or residential, according to permit documents. Fana estimates the second phase could be done in about five years and the third phase in about 10 years.

The first and third phases will occupy the northwest quarter of the block bounded by Northeast Fourth and Second streets and 106th and 108th avenues northeast.

The second phase would be at 305 108th Ave. N.E. between the Expedia Building and Civica Office Commons. Fana bought that site from Goldsmith Land Investments in 2014 for $13.5 million. Before selling the site, Goldsmith had begun permitting for a 15-story office building there.

As part of the overall project, Fana will demolish four buildings, including the nine-story Key Bank Building Fana bought in 2012 for $36 million.

The Schwartz Co. of Seattle is the owners' representative.

According to its website, Fana owns and operates more than 1.5 square feet of commercial and hospitality properties, including office buildings in the Puget Sound region and Toronto and a resort in Belize.