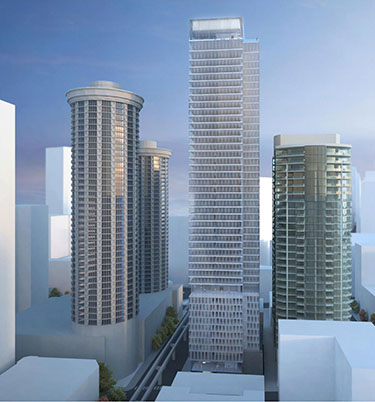 Douglaston Development has made some small changes to the design of its 45-story hotel and housing complex at Fifth and Virginia to address the nearby Escala condo tower and the monorail tracks.

The revised design shows more space between Douglaston's project and the Escala, shown here on the right. North-south setbacks also were added along the alley the two towers would share. The team also eliminated above-ground parking and lowered the height of the podium.

Douglaston's tower at 1933 Fifth Ave. would have an eight-level, 151-room hotel topped by 394 apartments, permit records show. There will be retail on the first two floors of the complex.

Perkins + Will is the architect.

Stanford Hotels Corp. is planning a 50-story tower — also a hotel topped by housing — that would share the half-block with Douglaston.

Douglaston is based in New York, and its website says it has three companies all led by Jeffrey Levine: Douglaston Development, Levine Builders and Clinton Management.

Over the past seven years, the website says, Douglaston has completed projects valued at $1.5 billion including 3,000 apartments, 2 million square feet of retail and 500 hotel rooms in New York City, as well as senior housing in the Southwest.

One of its major projects is in the Williamsburg neighborhood of Brooklyn: a 1 million-square-foot, mixed-use complex called The Edge, on a seven-acre site along the East River. The Edge has 565 condos in two towers, 347 affordable units in two mid-rises, as well as open space, a public esplanade and a water taxi pier.