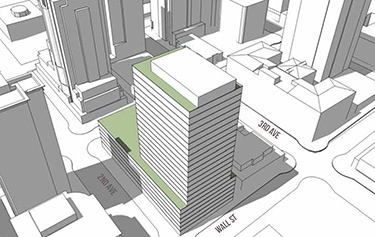 Ankrom Moisan Architects is designing the project, and Brumbaugh & Associates is listed as the landscape architect.

A massing study of AvalonBay's preferred alternative places the tower on the southwest corner of the half-block site. That location would create some space between current and future buildings, AvalonBay said in design documents.

AvalonBay proposes to put a large deck on the podium.

The 25-story McGuire was built in 2001, but had to be torn down 10 years later due to construction defects.

Most of the defects involved corrosion of post-tensioned cables, and deficiencies in the concrete and reinforcement placement, the owners of the building said in 2010. It's believed to be the first time a high rise in the Pacific Northwest was de-constructed because of defects.