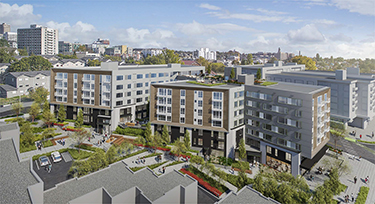 Vulcan Real Estate could get design approval this week for the first of three apartments projects it is planning at Yesler Terrace.

The first project will be at 123 Broadway. Vulcan wants to build 194 apartments, a single live-work unit, 2,387 square feet of retail and parking for 127 vehicles.

About 20 percent of the units will be available to people making less than 80 percent of area median income.

The site borders a mid-block path on the west side, and documents show there will be a large courtyard overlooking the path.

Lori Mason Curran, Vulcan's director of real estate investment strategy, said construction on the first block is set to begin by the middle of next year, and take about 20 months.

Runberg Architecture Group is designing the first block, and Exxel Pacific is the general contractor.

Vulcan plans to build a total of 650 units on the three blocks. Last year, Vulcan agreed to pay about $22 million for the land. The agreement is structured so each block will have a separate closing date — one a year until 2017. The first block is set to close in December.

Mason Curran said Vulcan plans to spend as much $200 million to buy and develop all three blocks.