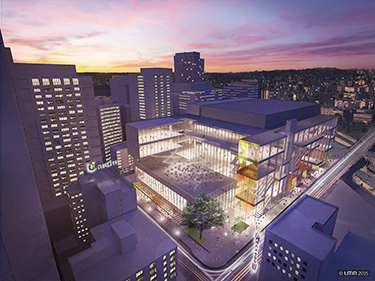 Image courtesy of LMN Architects [enlarge]
The convention center wants to use the land for the central piece of its expansion: a 1.2 million-square-foot building slated to open in 2020.

The Washington State Convention Center has struck a deal with King County to buy Convention Place Station for $147 million.

The sale allows WSCC to continue with plans to build a $1.4 billion expansion, which is slated to open in 2020.

WSCC will pay a total of $283 million including principal and interest over the life of the 30-year deal.

The purchase and sale agreement must be approved by the Metropolitan King County Council and the WSCC board of directors. A spokeswomen for the convention center said the County Council could vote on the agreement in the next few months.

As part of the deal, WSCC will contribute $5 million to affordable housing. WSCC could build housing next to the convention center or pay into a county housing program.

Convention Place Station is part of a 4.6-acre site that serves as a bus layover area and the north exit for the Downtown Seattle Transit Tunnel.

WSCC plans to use the land for the central piece of the expansion: a five-story, 1.2 million-square-foot building with 435,000 square feet of event space.

The WSCC spokeswoman said the purchase will help keep the expansion schedule on track.

Final design is expected in 2016, and construction is slated to begin in 2017.

LMN Architects is the designer and a Skanska-Hunt joint venture is the general contractor/construction manager. MKA is providing structural and civil engineering services. Pine Street Group is the development manager.

The project has not received a master use permit or filed for construction permits.

According to King County and WSCC, the addition is expected to generate 6,000 jobs during three years of construction.

Two adjoining blocks on the north side of Olive Way would be part of a “co-development program” that could add a 14-story office building and 30-story residential building. The sites will be permitted and then sold to provide developers to help pay for the convention center addition. Those blocks are not part of the King County sale.

The transit station at Convention Place has long been scheduled to close. Sound Transit decided not to put a station there for its light rail extension to Northgate. The increasing frequency of trains in the tunnel will force out buses that currently use the station.

Still, the station will remain open a while longer. WSCC has agreed to provide layover space for Metro Transit during construction, and buses will continue to use the site and operate in the transit tunnel until 2019.