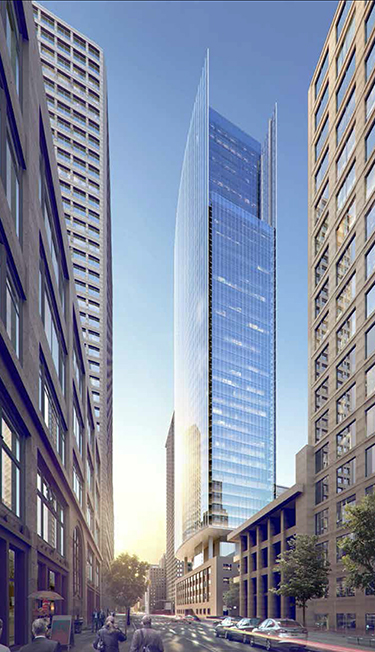 Image by Perkins+Will [enlarge]
The 664-foot structure would have a total of 48 stories, including the original four-story Federal Reserve Building.

Martin Selig Real Estate has updated its plans for the former Federal Reserve Building at 1015 Second Ave. in downtown Seattle, and wants to add 12 stories of housing to the office tower it originally proposed in August.

The 664-foot structure would have a total of 48 stories, including the original four-story Federal Reserve Building, which is listed on the National Register of Historic Places.

Perkins+Will is the architect. Lease Crutcher Lewis is the general contractor, and KPFF Consulting Engineers is the structural engineer.

A Seattle design review board will get its first look at the proposal at 7 p.m. Dec. 15 at Seattle City Hall, Room L280.

The 90,000-square-foot Federal Reserve Building was completed in 1950, and designed by Bill Bain Sr., founder of NBBJ in Seattle. The limestone-clad building has been vacant since 2008, and has remained mostly unchanged.

A 40-foot-tall terrace on the roof of the historic building would serve as a visual separation between the older structure and the curving glass tower above.

Selig acquired the Federal Reserve Building for $16 million in an auction earlier this year. A deal to sell the property to Sabey Corp. for $19.75 million fell apart in 2008 after a preservation group filed a lawsuit.

The design proposal filed with the city said landmark status for the building was denied in 2008, but is under consideration again. The Washington State Department of Historic Places is also reviewing the proposal.