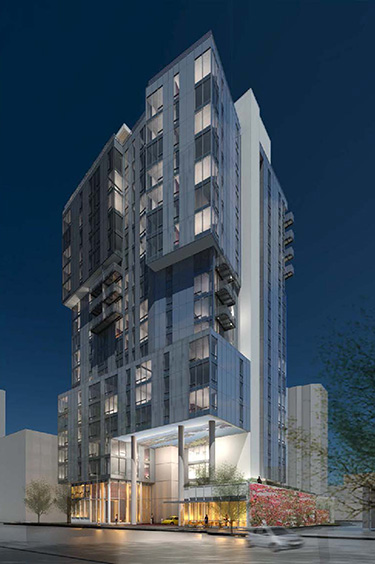 Images by Hewitt [enlarge]
A four-story, column-supported inset would sit over the lobby and vehicle entrance. 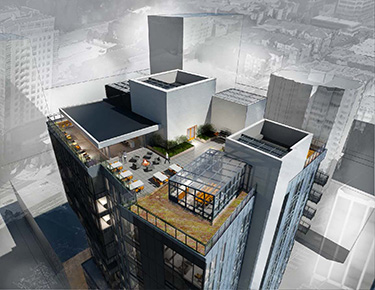 Plans by CD Heritage LLC call for 157 residential units, 900 square feet of commercial space, and five levels of underground parking for 211 vehicles. The project would include 24 units for lower-income residents.

A two-story office building on the half-acre site would be demolished.

The tower would be built between Northeast Eighth and Northeast 10th streets, on the east side of 108th Avenue Northeast.

The city of Bellevue issued an environmental determination of non-significance for the proposal on Thursday. Appeals of the decision are due at the City Clerk's Office by 5 p.m. Dec. 24.

Designs for the new tower show a four-story, column-supported inset over the lobby and vehicle entrances, with a ceiling mural depicting Mount Rainier.

The tower steps back on the seventh level, with different sections protruding at angles on the levels above.

Street-level commercial space would be on the southwest corner, and a large terrace with tables and seating is planned for the rooftop.

The project is slated to finish in December of 2017.

Two other projects are active on the west side of 108th, across the street from the tower site: Trammell Crow's 19-story 929 Office Tower, which is nearly complete; and West 77 Partners' six-story Hilton Garden Inn at Washington Square, which broke ground this fall.