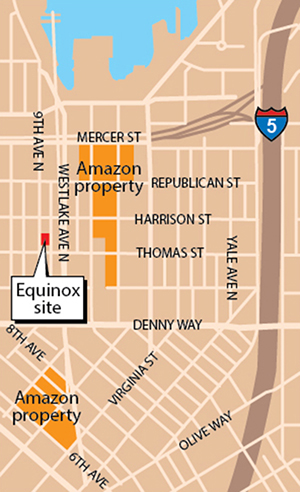 The developer who put Saturn in “the center of the universe,” has launched another expedition, and this one is not so far away: South Lake Union.

An entity related to Equinox Properties Corp., a development firm headed by Brian Regan, paid $4.6 million for a small parcel at 308 Ninth Ave. N. and is planning a seven-story building there with office and retail.

Regan's firm paid about $639 per square foot for the 7,200-square-foot site, which is about a block away from one of Amazon.com's buildings.

Regan told the DJC the 50,000-square-foot building will be partitioned into small office spaces that appeal to firms with a few employees, similar to other projects he has done in Fremont, Queen Anne and Ballard.

Perhaps the most well-known of Regan's projects is the Saturn Building at 3417 Evanston Ave. N. in Fremont. On the roof of the five-story structure is a 24-foot-diameter model of the planet Saturn.

Regan said his projects are not coworking spaces. They offer conventional office space but on a much smaller scale than other office buildings, with more flexibility to expand as needed. Regan said leases can be as short as three months for companies just getting started.

Regan plans to start the South Lake Union building before signing any tenants, just as he did with his other buildings.

Regan said he would start construction tomorrow if he could, but he hopes to get through the city permit process in about a year.

Mike Skidmore Architect is designing the project, and Exxel Pacific is doing preconstruction services. Regan said he has worked with both firms on past projects.

Tenants in his other buildings are a mix of tech startups as well as service providers such as attorneys, psychologists, accountants, masseuses and acupuncturists. He said this could change in the South Lake Union building because of Amazon and the tech-oriented people who live nearby.

“The local people are who our buildings serve, people who live in the neighborhood, who want a small space to work out of basically,” Regan said.

Many of the Equinox properties have the term “space” in them, and the websites have a celestial theme. It is both literal — the buildings have space for rent — and a nod to Seattle's forward-looking spirit.

Regan said the city has always focused on the future, and he points to all the high tech and life sciences innovations near his new South Lake Union property as proof of that.