First and Stewart, an 11-story hotel and apartment complex under construction at 1900 First Ave., casts a striking profile along First Avenue, and that's no accident. The structure has an angled exterior and will house a mix of uses, and that makes it unique and complex to build.

It will house a 158-room Thompson Hotel and 95 apartments.

The project is owned by a limited liability company that's a partnership of Touchstone executives Douglas Howe and Shawn Parry, and Geolo Capital. First and Stewart was about 80 percent done at the end of November, and substantial completion is set for March, said David Johnson of Turner Construction Co., the contractor.

Olson Kundig designed the shell and core, and Jensen Fey Architecture and Planning did the interiors.

The project team has coordinated throughout the process to find the most efficient way to build this unique structure. 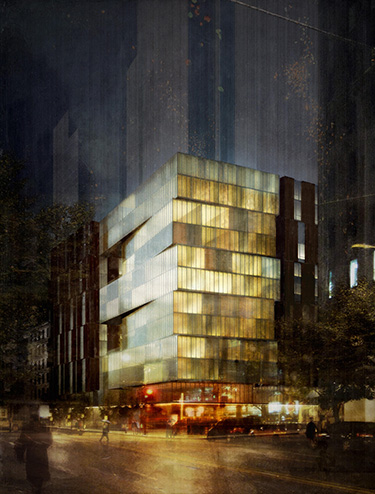 Courtesy Olson Kundig [enlarge]
The hotel and apartment complex is due to be completed in March.
Courtesy Turner Construction Co. [enlarge]
The project team collaborated early and has used modeling and prefabrication to design and build the structure.

On parts of the exterior, the curtainwall is set at different angles in two-level segments. Johnson said the intricate work requires installing steel and metal panels at each point where the exterior changes before putting in the glazing.

Typically, Johnson said, curtainwall can be stacked from the bottom up, using a single set of panels, because the angles don't change.

To deal with complex elements the team created a digital model, which allowed them to identify and fix problems before materials were brought on site to be assembled. Team members prefabricated many critical pieces off site.

“You're taking all that high-risk work on an exterior and putting it onto the table in a controlled shop,” said Matt Bystedt, project manager for Turner, adding that it's a lot easier to do a complex job when you are at ground level.

Johnson said that advanced modeling and prefabrication saved money and cut between one and three months off the schedule.

Another challenge is the site. It is one block from the market, and apartment buildings border it on the north and east sides. Many people have passed the site during construction so safety is a top priority. The project team started a newsletter to give the neighbors and nearby businesses updates.

The team also organized construction to minimize the closure of streets and sidewalks that would impact traffic and pedestrians.

“You can kind of train the people who live in the area and work in the area but with one million people per year or whatever it is going through the market, a lot of people don't know,” Bystedt said.

An affordable high rise in Boston

One of the biggest issues in Seattle — and many thriving cities — is how to preserve and create affordable housing. Specifically, how can cities entice developers to build affordable units?

One project in Boston provides insight into how complicated it is to produce units that are affordable and still viable for a developer. A company called Related Beal just started construction on a 14-story project in downtown Boston, and an article in the Boston Globe says all 239 units will be at below-market rents.

About half the units will rent to middle-income people who make up to $78,800 for a two-person household. The rest will be for lower-income renters. About 10 percent will be three-bedroom units.

The Globe reports that Related Beal used 11 private and public funding sources to make the $230 million project work. The project also includes a 220-room hotel, which will help offset the lower rents.

Related Beal is self-funding about a quarter of the project cost.

“Could you apply this exact formula to another project? No,” Ted Lubitz, vice president at Related Beal told the Globe. “But this is how you make it work, and these are the drivers of a project.”

The DJC last week reported on the sale of the building to Chicago-based Level Office, but the sale price was not available. The sale cleared King County property records Tuesday.

The Pioneer Building was constructed in 1892, and housed mining companies during the Klondike Gold Rush. It also had the city's first speakeasy during the prohibition era. In 1977, the Pioneer Building as well as the nearby iron pergola and totem pole were designated national historic landmarks.