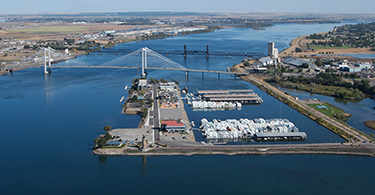 Photo courtesy of Port of Kennewick [enlarge]
The port owns the 14-acre Clover Island, which is accessible via a land bridge, and has been working to turn it into a destination with restaurants, offices, retail and housing.

The Port of Kennewick, an economic development agency, is seeking a contractor to build three production facilities for small wineries at 421 E. Columbia Drive. Two of the buildings will have wine tasting rooms, and there will be patios, parking and landscaping.

The village is expected to open in spring 2017, and the port plans a second phase, with space for more wineries as well as businesses like cheese shops and boutique restaurants.

Kennewick is in the Columbia Valley wine region, and port officials see this as a way to attract tourists and locals.

“There's a lot of places you can taste wine and there's a cluster of wineries you can visit but none of them (in the region) are on the waterfront,” said Tana Bader Inglima, the port's deputy CEO.

McNary Dam, built by the Corps of Engineers in 1954 near Umatilla, Oregon, provides flood protection and electricity, but Inglima said the tall levees that control slack water pooled behind the dam have walled off Kennewick, Pasco and Richland from the river.

In Kennewick, new development moved south and west — away from the waterfront and part of the city's historic downtown, she said, and that older area became neglected. The wine village will on part of 16 acres the port owns in the older area, bordered by Duffy's Pond, Columbia Drive, Clover Island Drive and the SR 397 cable bridge.

On that acreage near Clover Island Drive the port also wants to build a mixed-use development called The Willows. Inglima said the plan is for a craft brewery, art studio, offices, condos, apartments, a boutique hotel, restaurants and a day spa.

Rendering courtesy of Terence L. Thornhill, Architect [enlarge]
This is the first phase of Columbia Gardens Wine & Artisan Village. The goal is to have wineries, tasting rooms and other businesses. The port also plans another mixed-use development nearby called The Willows, with a brewery, offices, housing, a hotel and restaurants.

Efforts also are under way to connect the rest of the historic downtown two blocks south with the waterfront.

North of The Willows the port owns Clover Island, which shrunk from 162 acres to 14 acres as the water rose after McNary was built. Over the past decade, the port has worked to turn the island, which is accessible via a land bridge, into a waterfront destination with restaurants, offices, retail and housing.

It has added a lighthouse, gateway arch, overlooks, artwork, restrooms and parking. With financial help from the city and state, crews restored part of the shoreline and built a riverwalk to connect with Sacagawea Heritage Trail. The trail is a 21-mile, paved path for bikes and pedestrians through the Tri-Cities.

The port also renovated the island's marina and boat launch, and constructed a building for the yacht club and businesses, as well as a two-story port headquarters that also houses Ice Harbor Brewing Co.

The Corps is paying 75 percent of the cost to complete the riverwalk and restore the island's remaining shoreline. Construction is slated to start by early 2018.

Inglima said the port will seek private developers for much of The Willows, Clover Island and probably for phase two of the wine village.

The port does not have barging, rail or airport facilities. It buys distressed properties and tries to encourage development on that land. Port funding comes from property taxes and leases.

“We are not out to compete with the private sector, but there are opportunities that are under utilized,” Inglima said. “I think more and more ports are doing what we're doing.”

Terence L. Thornhill, Architect designed the first phase of the 13,220-square-foot Columbia Gardens Wine & Artisan Village, which the port estimates will cost $2.58 million to build. The city will pay up to $1.3 million for infrastructure, including a wine wastewater treatment facility, streetscaping and a trail.

Inglima said the Corps controls access to most of the Columbia River in Kennewick.

The wine village, Clover Island project and The Willows will give people a chance to use the riverfront, she said. “Our community has been clamoring for it.”