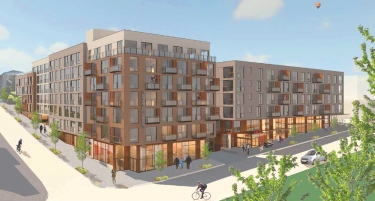 Lake Union Partners is set to receive recommendations from a Seattle design review board for a proposed 243-unit mixed-use complex on the site of the Columbia City post office.

Johnston Architect is the designer.

The proposal is for two five- to seven-story structures set on a sloped site facing Rainier Avenue South and South Alaska Street. A private 9,800-square-foot courtyard would be set between the buildings.

The residential units would include a mix of studio, one-bedroom, open one-bedroom, and two-bedroom apartments, and two live-work spaces. Plans for the rooftop deck include a fire pit, dog run and bocce court.

Public plazas would flank the retail and lobby entrances facing Rainier. A public hillclimb would run from one of the plazas to Alaska Street, along the west side of the complex.

An existing two-story commercial building on the corner of Rainier and Alaska would remain.

Joe Ferguson, principal at Lake Union Partners, told the DJC last year that there is an unmet demand for commercial office space for small firms that want to live and work in the neighborhood.