14% of U.S. neighborhoods are walkable, affordable, have good schools: Redfin 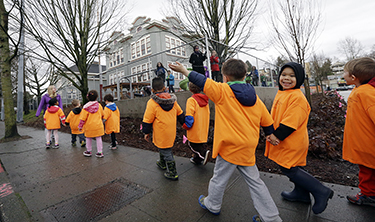 AP Photo/Elaine Thompson [enlarge]
A preschool class takes a walk in Seattle’s University District, which Redfin ranked as the highest in the U.S. for walkability, affordability and quality of schools. Redfin found 24 neighborhoods in eight cities met all three criteria; seven were in Seattle.

WASHINGTON — Few neighborhoods can match the perks of Adams Morgan in Washington, D.C. — a reality that reflects a broader problem for the U.S. housing market.

Residents of Adams Morgan enjoy a bevy of bars, restaurants, exercise studios and shopping, just steps from their row houses and condo buildings. Home values are reasonable relative to neighborhood incomes. And in general, the area schools rate as better than average nationally.

Across the country, just 14 percent of neighborhoods manage to be at once affordably priced, walkable and near decent schools. And many of those neighborhoods exist in only two cities: Washington and Seattle, according to a new analysis released Wednesday by the real estate brokerage Redfin.

The findings suggest a substantial mismatch between the neighborhoods where people say they want to live and the homes actually available to them.

The analysis examined 170 neighborhoods in 20 cities, comparing home sales and income data with rankings from the organizations Walk Score and GreatSchools. Some cities, such as Baltimore, Boston and Philadelphia, contained balanced neighborhoods — where people of different income classes could afford to live — but their schools performed poorly.

Others, such as Phoenix, San Antonio and Columbus, Ohio, enjoy above-average neighborhood schools. But their communities pretty much require cars for doing basic errands.

Homebuyers have long sought high-quality schools. But a rising emphasis on walkability reflects a generational shift. Compared with older generations, millennials, ages 18 to 34, disproportionately prefer walking, according to a survey released in July by the National Association of Realtors and the Transportation Research and Education Center at Portland State University.

Nearly a third of millennials commute to work or school by foot, compared with 13 percent for the post-World War II baby boom generation.

In the Redfin report, only 24 neighborhoods in eight cities met all three criteria of walkability, affordability and schools. Seven of the neighborhoods were in Seattle. Its University District neighborhood — site of the University of Washington's campus — ranked as the highest.

Though housing in the University District is expensive — the median home value is near $620,000, roughly triple the national level — high area incomes tend to make it relatively affordable. More than 57 percent of families earned more than $100,000 in 2014, according to the Census Bureau.

Three of the top neighborhoods were in Washington, D.C. Adams Morgan — ranked third by Redfin — is packed with bars along its 18th Street corridor. Yet its residents are also relatively well-paid, with 61 percent of families making at least $100,000. Among the new condo buildings is Ontario 17, which has sold over 70 percent of its units since its pre-construction sales began a year ago. Its ground floor features a Pilates-style studio.

“A lot of the homeowners who did purchase already lived in Adams Morgan,” said Brenda Moreno, the broker managing condo sales for the building. “People want to be very close to work.”

But the increased popularity of walkable neighborhoods could mean that many will eventually lose their affordability. The Redfin analysis shows that few walkable communities also have access to better-than-average public and charter schools — meaning that their home values might rise and cause affordability to drop.

A separate measure by the real estate data firm Zillow shows that prices in Seattle's University District have shot up nearly 17 percent in the past 12 months, a sign that walkable neighborhoods may soon price out its least prosperous residents.