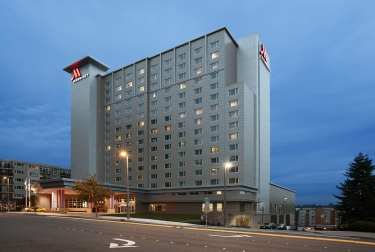 A real estate investment trust called Carey Watermark Investors 2 said last month it purchased the 384-room hotel but did not give the price.

The REIT, which is managed by W.P. Carey Inc. of New York and Watermark Capital Partners of Lake Forest, Illinois, paid approximately $425,415 per room.

The property was developed by the seller, which is an entity that shares an address with Whiteco Residential of Merrillville, Indiana. The hotel opened in July 2015.

It has 21,000 square feet of meeting and event space, a food and beverage area, M Club lounge, a gym and a business center.

Carey Watermark said in a press release announcing the deal last month that high tech job growth around the region is boosting hotel occupancy. Revenue per available room, known as RevPAR, is a statistic used to measure hotels' financial strength. In Bellevue, the press release said RevPAR grew 9.3 percent per year between 2009 and 2014. Nationwide, RevPAR increased 6.8 percent per year during those years. RevPAR in Bellevue increased 8.1 percent between November 2014 and November 2015.

Carey Watermark also cited proximity to Microsoft, The Shops at the Bravern and two future Sound Transit light rail stations as factors in the decision to buy this hotel.