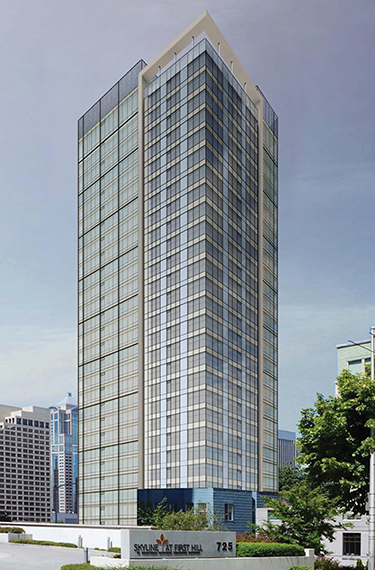 Kevin Daniels said his firm is under contract to purchase the site at 800 Columbia St. from the current owner, Swedish pension fund Alecta. Daniels is planning a 284-unit project that will be the same size and massing as a project Alecta proposed in 2012 with similar materials and outdoor space. Daniels said his project will have a simplified design, larger units and changes to the roof.

Daniels said the building is being designed with condos in mind, but the firm has not made a final decision on that. A simplified design that is easier to build would help with potential liability issues down the road if Daniels decided to go with condos, he said.

LMN Architects is Daniels' architect on the project. Weber Thompson did the original design for Alecta, but Daniels said the firm declined to continue working on it because it had too many other projects.

Daniels said he would like to begin construction by the end of 2017. Before starting work, Daniels has to complete the city review process, and he plans to sit down with neighborhood groups and other interested stakeholders to go over changes to the project.

Daniels recently submitted some changes to the project's master use permit to reflect the simplified design. The project already went through design and environmental review, according to permitting information.

Alecta snapped up several parcels around First Hill from 2010 to 2012 and later filed plans for three projects, including one at 800 Columbia. So far, one of them is under construction: the 24-story, 168-unit Luma condo tower at 1321 Seneca St. that Alecta is working on with Lowe Enterprises. The project topped out earlier this month and is set for a June opening.

The third site is at 500 Terry Ave. In 2013, the city approved a 27-story residential tower, but there has been little activity since then.