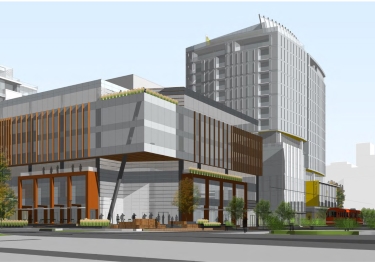 Vulcan Real Estate said it hopes to start construction next year on a 14-story office and apartment project at 625 Boren Ave. N. in Seattle.

Graphite Design Group is designing the project, Runberg Architecture Group is consulting on the residential portion, and GLY Construction is providing preconstruction services.

There will be 307,900 square feet of office space in six stories, and an eight-story, 79-unit apartment building will sit on top of part of the office podium.

The project will have about 7,850 square feet of retail, which will run along Valley Street and Terry Avenue North and Boren Avenue North. The retail space will include one- and two-story glass “boxes” that modulate in and out from the office window wall.

The project will also have 371 below-grade parking stalls and 17,900 square feet of open space. That space will include a through-block woonerf connecting Terry Avenue North and Boren Avenue North at mid-block.

The primary building entries will be from Valley and Mercer streets. Cars will enter from Boren.