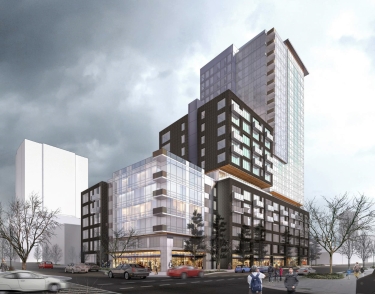 AvalonBay Communities has updated its plans for a 24-story apartment tower at 210 Wall St. in Belltown.

The site is the former home of the McGuire, the 25-story apartment tower that was torn down in 2011, only a decade after it was completed.

The city of Seattle will hold an early design guidance meeting for the AvalonBay project at 5:30 p.m. today at Seattle City Hall, Room L280.

The new tower would have 300 apartments, 10,000 square feet of street-level retail and 250 underground parking spaces.

Ankrom Moisan is the architect, and Brumbaugh & Associates is the landscape architect.

The updated design breaks the tower into three tiers, a move intended to reduce its visual bulk and its impact on neighboring buildings. The tower would have a six-level podium, a mid-rise tier, and a full-height tier.

The podium would have a large rooftop deck for residents. Another rooftop deck is planned atop the 23rd floor.

Retail would line the street-facing sides of the building, which include Wall Street, Second Avenue and Vine Street. The residential entrance would be on Vine, and parking would be accessible from an alley running east of the tower.

The previous building was demolished because of construction defects, which involved corrosion of post-tensioned cables, and deficiencies in the concrete and reinforcement placement.