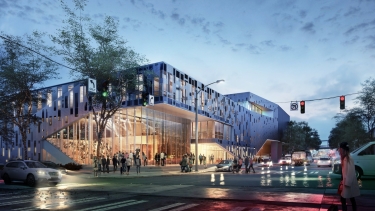 NBBJ renderings by MOTIV [enlarge]
A new four-story building for Seattle Opera would replace Mercer Arena at Fourth and Mercer.

Seattle Opera has revived pre-recession plans to knock down the long-vacant Mercer Arena and bring some of its operations to a new building at Seattle Center.

The opera's board late last year decided to go ahead with plans for a new four-story, 105,000-square-foot facility on the site of the condemned Mercer Arena at Fourth Avenue North and Mercer Street. The new building would be next door to McCaw Hall, where Seattle Opera's performances take place, and will contain administrative offices; costume, prop and tech storage; scene assembly; rehearsal and community and education spaces. The opera envisions the project, called Seattle Opera at the Center, as a civic space where anyone can see and learn about the technical and artistic aspects of putting together a show.

The city owns the building and land, and Seattle Opera signed a long-term lease for the space in 2007. The opera started planning a new building, but that was stalled by the recession.

Today the opera leases about 76,700 square feet at the Fred Rogers Building at 1020 John St. in South Lake Union for its offices and other back-of-house functions. That lease expires at the end of 2018, and the opera wants to move into the new building when the lease is up. Seattle Opera General Director Aidan Lang said the timeline of the lease, or as he referred to it, “the sword of Damocles hanging over us” helped motivate the board to move forward with plans for the new building now.

Seattle Opera wants to begin construction January 2017. The project is in the schematic design, and Seattle Opera will spend the next year finishing the design and going through the entitlement and permitting process with the city.

About $14 million of the $60 million project will be paid for with a mixture federal, state, county and city funds. The rest will come from private donations. Lang said about two-thirds of the funding has been secured. 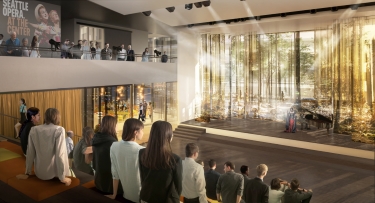 [enlarge]
The new building would be publicly accessible with community and education spaces.

NBBJ is the architect on the project, Lease Crutcher Lewis is the general contractor and Shiels Obletz Johnsen is the project manager.

Lang is British and spent seven years as a general director of the New Zealand Opera before coming to Seattle Opera. He said the new building embraces one of the biggest trends in theater: transparency. Typically, everything in a performance but the main stage is hidden from the audience. The public accessibility of the building gives people a sneak peak at a show while it is coming together. Lang said people appreciate arts more when they can develop a personal connection.

“We're turning the whole thing around and inviting people in with lookouts into the workshop, into the rehearsal space,” Lang said.

This iteration of the building is smaller than the pre-recession plan. Lang said the previous plan included space for constructing sets. The opera owns a building in Renton where sets are made, and all the material suppliers are close by. Lang said keeping set construction in Renton saves money, and it keeps an industrial use out of Seattle Center.

The opera hopes its project will make Fourth and Mercer an active corner for pedestrians. A large glass window at the corner gives pedestrians walking by a view into the rehearsal, community and education spaces. Retail and the opera box office will both front Mercer.

Seattle Center anticipates the north side of the grounds becoming a Theatre District, and a new building at Fourth and Mercer is a big part of that.

“We feel very strongly this will be a catalyst for further redevelopment of Seattle Center, which will need doing, and on Mercer generally,” Lang said.