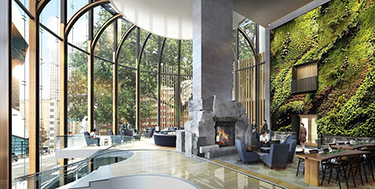 Courtesy Studio 216 [enlarge]
The lobby will have a 30-foot glass rotunda and a three-story living wall. 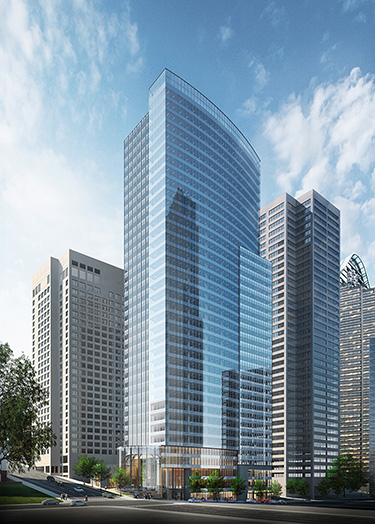 Courtesy Studio 216 [enlarge]
The tower will be a "vertical corporate campus."

On Tuesday, Cornerstone Real Estate Advisers announced it has formed a joint venture with Schnitzer West to develop Madison Centre at 505 Madison St. in Seattle.

Schnitzer previously was developing the project on its own.

The 36-story office tower has been under construction for more than a year and is expected to open in the second quarter of 2017. It will have 746,000 square feet of office space and 7,800 square feet of ground-floor retail. There will be seven levels of parking for 480 cars underground.

Cornerstone said the project is getting a $150 million equity contribution from one of its institutional clients.

“Seattle's solid economic fundamentals, strong job market and appeal from a lifestyle perspective have created an ideal environment for a thriving office market,” said John Kennedy, western regional director of Cornerstone, in a news release. “The optimal location and sophisticated design have positioned Madison Centre to become one of the most iconic office developments in Seattle, making it a highly attractive investment for our client.”

Cornerstone also said it and Schnitzer closed a construction loan for the project with Blackstone Real Estate Debt Strategies and Bank of the Ozarks.

Cornerstone said the “vertical corporate campus” will have amenities typically found in multi-building corporate headquarters, such as a “great room” lobby with a 30-foot glass rotunda, suspended spiral staircase and a three-story living wall.

The exterior will be clad in glass and aluminum curtain wall. The project was designed to LEED gold standards.

NBBJ is designing the core and shell. HKS Architects of San Francisco is the interior architect and BAMO is interior designer. DCI Engineers is the structural engineer. Oscar Oliveira and Damon McCartney of Broderick Group are leading the tenant search.