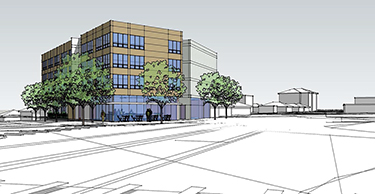 A 46-unit apartment building has been proposed for a site near the Beacon Hill light rail station.

The four-story project would be built at 2902 Beacon Ave. S.

A Seattle design review board will get its first look at the proposal at 6:30 p.m. today at Rainier Valley Cultural Center, 3515 S. Alaska St.

Encore Architects is the designer and Karen Kiest is the landscape architect. Marpac Construction is the general contractor.

A 2,600-square-foot retail space is planned at the southeast corner of Beacon Avenue South and South Forest Street. Lobby and garage access would be on Forest Street.

Parking for 15 vehicles would be constructed below grade.

This rendering shows the preferred massing, which design documents describe as two parallel bars running parallel to Forest Street. The rectangular shape is meant to echo the Beacon Hill light rail station, which is a couple of blocks to the northwest.

Floor plans show studio and one-bedroom units that range from around 525 to 800 square feet. The roof would have a landscaped deck.

A single-story medical office building and parking lot now on the site would be demolished.