55 units due for tight site on Boylston 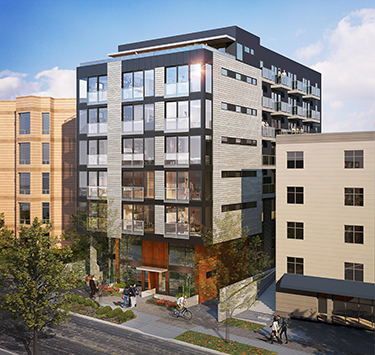 An eight-story apartment building with 55 units has been proposed for a site two blocks east of the Capitol Hill light rail station, which opens next month.

The site is at 1820 Boylston Ave. An eight-unit apartment building would be demolished.

The ownership group is Capitol Hill Lofts LLC, whose members include Christopher Hall and Joshua Fletcher. Nicholson Kovalchick Architects is the designer.

A Seattle design review board will give its recommendations at 8 tonight in Room 203 of Seattle University's Pigott Building, at 901 12th Ave.

The proposal includes underground parking for 13 vehicles. The narrow, mid-block site is surrounded by other buildings and lacks an alley, so parking access will be from Boylston.

The lobby and ground-floor units will be recessed to distinguish the ground levels from the massing above, and to allow patio spaces. The top floor has also been pulled back to make the building appear less tall from the street, and make room for a pair of rooftop decks.