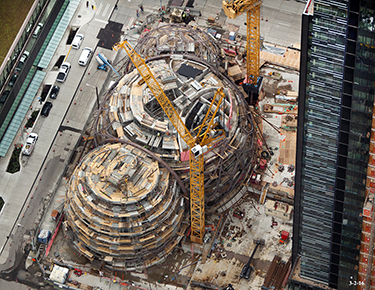 Photo by Soundview Aerial Photography [enlarge]
The spheres are 80 to 95 feet tall, with 57,000 square feet inside for plants and fountains.

Amazon's campus in the Denny Triangle neighborhood will eventually have at least three shiny office towers, but the most eye-catching piece may be the three giant spheres that are rising now along Lenora Street between Sixth and Seventh avenues.

Sellen Construction is building structural steel frames for the spheres and expects to have that finished by the end of the month. In early April crews will begin installing the glass facades.

Sellen's website says there will be 57,000 square feet inside the spheres. They range in height from 80 and 95 feet. Inside will be terrariums with rare plants, water features and fabric ceilings with a tree-branch motif.

“The spheres will act as a relaxing getaway spot for (Amazon) employees and will include open space and food vendors,” according to the website.

Next to the spheres on the same block, Sellen is building a 38-story office tower with seven levels of below-grade parking. Crews are installing curtainwall and the mechanical penthouse for the tower, and finishing the interior.

Both the tower and spheres are expected to be finished later this year.

In December, Amazon opened the 36-story Doppler building and a low-rise meeting center on the block across Lenora from the spheres. The Doppler has a dog park on roof of the 17th floor, and multi-colored metal panels on the facade.

This fall, Amazon will start construction on the third block in the Denny Triangle campus. The site is bounded by Blanchard and Lenora streets, and Seventh and Eighth avenues. Plans call for 1.1 million square feet of office space in a 38-story tower and an eight-story building.

It's unclear if buildings slated for the fourth block are included in the 3.3 million-square-foot total.

NBBJ is the architect, Sellen is the contractor and the Seneca Group is managing development for the first three blocks.