Apartments are planned on Jackson 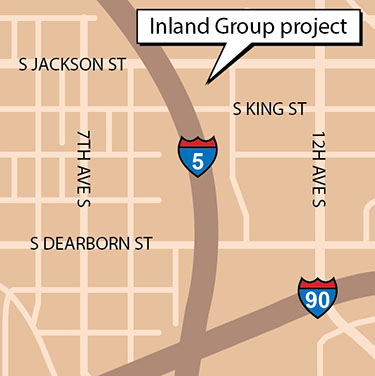 Inland recently filed a master use permit for approximately 247 apartments at the site, which is just east of Interstate 5 at South Jackson Street and 10th Avenue South. The complex would also have 8,000 square feet of retail, and 93 parking spaces for cars and 87 spaces for bikes.

The MUP application contains minutes from a January meeting with the International Special Review District in which the units are described as affordable workforce housing. It is unclear what level of affordability the developer will target.

Inland representatives did not return a request for comment.

The project will receive $10 million through Seattle Office of Housing's Rental Housing Program. It is one of six affordable housing projects the city said last year would get a total of $45 million through that program.

Nystrom + Olson Architecture of Spokane is designing the complex, and Inland's construction arm will build it. Other team members are Davido Consulting Group; Bush, Roed & Hitchings; Emerald City Engineers; and The LA Studio.

Three warehouses and a restaurant are on the site now.

The property is kitty corner from a site where Chinn Investments of Redmond is proposing a four-building, mixed-use project on 2.5 acres at 1032 S. Jackson St. Chinn's site is now home to Asian Plaza, an office and retail complex that houses Viet Wah Supermarket, Puget Sound Sage, Pacific Travel, and restaurants such as Tamarind Tree and Sichuanese Cuisine.

Chinn wants to build 240 apartments, a 180-room business hotel, a community theater, child care center, and 80,000 square feet of restaurant and retail. There would also be more than 600 parking spaces underground.