Crib Notes: A sunny stroll through Amazonland shows how the ‘bread loaves' compare to the new ‘pencils'

It's a sunny Sunday afternoon in the heart of South Lake Union's office district and all the new restaurants that have popped up like mushrooms on a forest floor are ... Yep, full!

Probably some of these folks are Amsouls taking a break from cryin' at their desks today, but the eateries are full of all kinds of people: families, young couples, older tourist-types. There's the happy ding-ding of the South Lake Union trolley. The catalpa trees are bloomin' along Westlake.

Outdoor seating is most prized on this summery spring day.

Crib Notes is no South Lake Union basher. Anything can be critiqued, architecturally or any other way. But Crib thinks SLU ain't bad, and in fact it seems more like a miracle — a place that generates prosperity and creativity.

And the guacamole at this Cactus Mexican restaurant at Harrison and Terry is to die for. 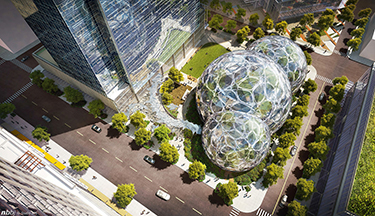 Crib is taking a hike through SLU and trying to figure out a few things: Where does SLU go from here? What's next — particularly with all this new housing?

While the rest of the city and region will get very little new condo development any time soon — as in years — SLU will. That's because they'll be in large, concrete-glass-and-steel towers that can justify pushing through the risk of construction defect lawsuits.

Insignia, the 40-story, two-tower condo megaproject next to Amazon's new headquarters towers, is nearly sold out and a different builder has a fresh 40-story condo tower on the drawing boards.

So let's look around SLU.

First of all, this place is big! Especially since Crib now hereby officially lumps the “Denny Regrade” into SLU. It makes sense because of the fact that the triangular Regrade (on SLU's southwest flank) is where Amazon is building its skyscrapers.

When we talk about SLU, we're talkin' from the Westin Hotel all the way up to the seafood restaurants and Museum of History & Industry on Lake Union, and from Interstate 5 west to Highway 99.

Microsoft co-founder Paul Allen didn't start this wholesale SLU redo so it would become Amazonland. Twenty years ago he had Zymogenetics and Amgen (that is, biotech) in mind, after his plan to replace some of the dusty one-story marine supply shops with a big park that he would help fund didn't happen.

But it's definitely Amazonland today, with a side of biotech.

Lots of apartments are under construction. Crib sees rents as low as $1,200 a month for older 1-bedrooms, up to a recent lease for $7,000 a month for a 40th-floor penthouse condo at Insignia.

Onni Group said it still hasn't decided whether to shift its massive project proposed for the former Seattle Times property from apartments to condos. That would be two 41-story towers with 1,197 units, plus two smaller buildings.

Burrard Group of Vancouver, B.C., recently said it wants to build 40 stories at 1200 Howell St. with at least 360 condos. Burrard calls the project Nexus and says some small one-bedroom units in Nexus could sell at “attainable” prices as low as $300,000. (Stay tuned on that!).

Some critics have lamented that the first big office corridor — along Terry Avenue — in this remake of SLU has colder exterior architecture than they would like. Crib says: Well duh, it's an office corridor. A place to make and remake digital retail. And in fact for such a corridor, it sure has attracted a lot of Sunday brunchers today.

Crib's biggest complaint is how the city bureaucracy was too slow at upzoning this office corridor; too slow by years. The result is a whole bunch of blocky six- and eight-story buildings that eat up the groundscape where sleeker towers would have allowed view corridors and bigger public plazas and pedestrian walk-throughs at their bases.

The city didn't exactly dither. It tried. But it stuck with its slow process instead of saying: Let's do a faster process.

Amazon's explosive growth was just about to begin, and each new building is a 100-year opportunity. Get it wrong or get it right — for 100 years. At the time, proponents of the zoning improvements warned of block after block of “bread loaves” instead of “pencils.” So in this SLU office corridor we got the bread loaves, along with some pretty nice, usable plazas.

To compare, let's go from Harrison and Terry (among the bread loaves) over to Amazon's new HQ towers (and their half-finished 3-story biodomes) along Sixth Avenue at Lenora, Blanchard and Bell. The pedestrian level here is urbanist nirvana, including a brilliant separate bike lane between the street and sidewalk, with swales between the bike lane and the street.

Mid-day on a recent weekday, there seemed to be as many dog walkers strolling around here as there were Amsouls foraging in those interesting new restaurants.

It has been more than tempting for the bring-me-back-to-Neverland folks to suggest that all of this area's very large future growth can or should go into this spot north of downtown. Crib says no way. Other areas should get some of these benefits too!

Crib calls Amazon the “stem cells” of Seattle's and the Puget Sound area's economy. Boeing, Microsoft, Starbucks, Paccar and others are big employers — Amazon is the job-growth maker.

Fourteen years ago, economic development professor Richard Florida told U.S. cities that the “winners” in the next economic development cycle would be the places that figure out how to appeal to young tech workers. They stare at screens all day, and want to play nearby at night and on weekends, then crash in stacked housing. His 2002 book telling that story is called “The Rise of the Creative Class.”

Amazon someday will plateau. It will go from gangly teenager to staid mid-lifer, as Microsoft did. When? Well, that's THE BIG QUESTION. It's not lookin' like any time soon.

When Amazon slows, SLU's growth will pause, too. Then take off again.

Until then, watching SLU will be like watching one of those National Geographic high-speed videos of plants growing.

Before forming too many opinions about SLU, come on down and see for yourself. Brunch on Sunday perhaps.