Urban Visions refines design for ‘S' campus next to Interstate 90 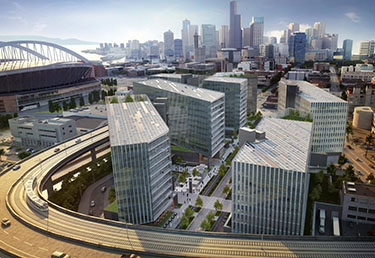 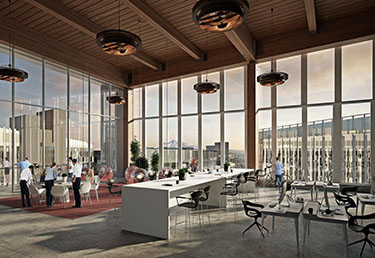 Urban Visions has made a few tweaks to a big project that it's billing as “downtown Seattle's last campus opportunity.”

The complex is known as S, and the latest plans show 990,000 square feet in five buildings ranging from eight to 10 stories. The site is bounded by Airport Way South and Interstate 90, and the buildings would straddle Sixth Avenue South.

Urban Visions also owns a site just north of the S project site, at 831 Seattle Blvd. S., and permit records show it has begun preliminary planning for a 10-story office structure there.

Greg Smith of Urban Visions did not return a phone call requesting comment.

The project is split into four phases in the design review documents. The first two phases would have three buildings with about 637,000 square feet — including parking, retail and amenities as well as outdoor spaces. These buildings would be on the west side of Sixth Avenue South and have retail facing the street.

Two more buildings are planned on the east side of Sixth in phases three and four. They would total 353,000 square feet.

Smith told the DJC last year he would not start construction without a tenant.

NBBJ is designing the campus, and the DJC reported last year that Sellen Construction is doing preconstruction services. Other team members are Magnusson Klemencic Associates, Berger Partnership and Hart Crowser.

The DJC previously reported that S would be enrolled in the Living Building Challenge, but design documents say the team is no longer pursuing that designation, though the project will incorporate some aspects of that program.

S will have a network of water features throughout the site, designed to reflect the history of the Duwamish watershed.