Here's what the new towers near WSCC's expansion could look like

By JOURNAL STAFF
Courtesy LMN Architects [enlarge]
There will be a 29-story tower with 409 apartments and a 16-story, 500,000-square-foot office building on two sites north of the expansion.
[enlarge]
The sites will be sold to other developers after permits are secured. 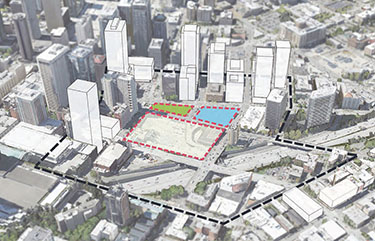 [enlarge]
Underneath the two tower blocks will be loading areas for the center. The WSCC expansion is shown here in white.

Expansion of the Washington State Convention Center is expected to bring in thousands of new visitors every year, but it will also bring new residents and office workers right across the street.

The $1.4 billion expansion includes some “co-development” projects: a 29-story tower with 409 apartments at 920 Olive Way; and a 16-story, 500,000-square-foot office building at 1711 Boren Ave. The towers will go on two sites north of the proposed expansion.

Pine Street Group, the development manager for WSCC, is getting the projects permitted. The sites will be sold to other developers after permits are secured.

Matt Griffin of Pine Street Group said the properties could go on the market in about a year.

A design review recommendation meeting for the office and residential towers is set for 5:30 p.m. May 17 at Seattle City Hall, 600 Fifth Ave.

Underneath the two tower blocks will be loading areas for the convention center, so the project team still has work to do to determine exactly what the office/apartment developers will be buying. The underground loading areas will take up space typically used for parking, but Griffin said the buyers of the sites could work out an agreement with WSCC to use spaces in the original convention center and the expansion.

The structure will have 11 stories above ground and two stories underground.

The goal is to begin construction on the WSCC expansion next summer and finish in 2020. Griffin said the most practical time to start the apartment and office towers would be 12 to 18 months after work begins on the expansion so that all the elements can open together.

LMN Architects is designing the expansion and the co-development towers. Magnusson Klemencic Associates is providing structural and civil engineering services.

A joint venture of Skanska and Hunt Construction Group was the GC/CM but that contract was terminated earlier this year. A legal dispute between the WSCC and Skanska-Hunt was resolved in April, and now Pine Street Group and WSCC are working to find a new contractor.

Griffin said the WSCC board of directors has asked for information on three possible options: negotiating with the other two finalists on the original bid: Mortenson Construction with PCL Construction Services and Clark Construction Group with Lease Crutcher Lewis; starting the procurement process for a new GC/CM; and going with a traditional design-bid-build contract.