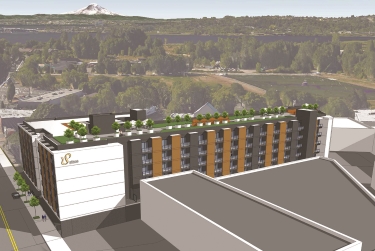 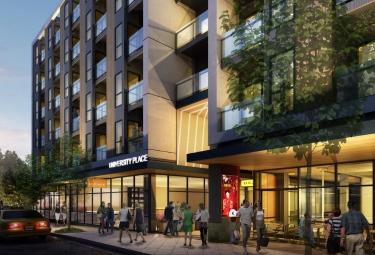 The site, at 4609 Union Bay Place N.E., is on a gritty arterial peppered with parking lots, open yards and light-industrial buildings.

The six-story project, called University Place at Union Bay, would aim to change the flavor of the street by adding residents and 21,000 square feet of retail space. The retail area would have space for seven businesses, including a food hall and a destination restaurant.

DLR Group will present updated plans to a Seattle design review board at a recommendation meeting scheduled for 6:30 p.m. today at University Heights Community Center, Room 109, at 5031 University Way N.E.

In plans filed with the city, architects say “this transformed brownfield site intends to bridge the activity generated by University Village to the elevated adjacent residential zone.”

The residential units are described as condominiums.

Parking for 69 vehicles would be available on a single basement level. There would also be 138 bicycle stalls.

Retail visitors would first pass under an eye-catching 23-foot-tall gateway to reach a food hall with multiple vendors and activities. The west side would be anchored by the restaurant.

Residents would have access to a second-floor garden court and a rooftop deck.

A Safeway store is directly behind the site, so the project would have guard walls to block views and buffer noise from the grocery store's rooftop equipment, loading dock and trash area.

The authorized representative of University Place WA LLC is listed as Qinglun Zeng.