By JOURNAL STAFF
Image courtesy of Schemata Workshop [enlarge]
Schemata Workshop is designing this apartment complex for Capitol Hill Housing on the B-North site above the station. It will have about 90 affordable units. 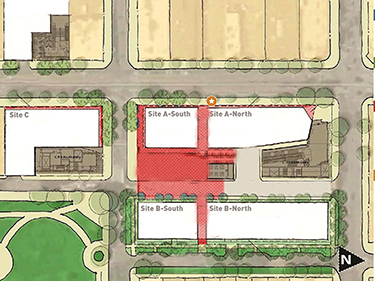 Sound Transit yesterday approved a $2.6 million sale of the “B-North” site, one of four atop the new Capitol Hill light-rail station, to Capitol Hill Housing.

The parcel is at the northeast corner of East John Street and 10th Avenue East.

Last year Sound Transit accepted Portland developer Gerding Edlen's proposal to oversee development of four sites near the station. Three of the sites are expected to be leased to Gerding, and one has now been sold to CHH.

New development will fill the block that is bounded by Broadway, East Denny Way, East John Street and 10th Avenue East. The site also extends to the south beyond Denny.

Jill Sherman of Gerding Edlen says the company hopes to begin developing all four sites in 2018 and complete them in 2019, with a rough budget of $130 million. CHH's project is estimated to cost another $28 million and $30 million.

CHH says that it'll now begin the financing for B-North, followed by permitting and design reviews. The plan is for a seven-story apartment building that will have about 90 permanently affordable housing units (accommodating about 200 people) and one level of underground parking.

Sound Transit will likely approve a long-term lease with Gerding Edlen at its Aug. 25 board meeting.

Gerding Edlen's three new buildings would contain retail, parking, and about 207 market-rate and 125 affordable apartments that would have income restrictions, which would end in 12 years.

All four buildings are planned at seven stories, with a central pedestrian plaza bisecting the main block. Central Co-op has said it would like to operate a grocery there.

The entire transit-oriented development would contain about 100,000 square feet. Sherman estimates the whole project, yet unnamed, would house between 800 and 900 people in about 400 units.

The Capitol Hill light-rail station opened in March, connecting downtown to Husky Stadium, and boosting ridership 27 percent from the first quarter of 2015.