On the Block: Anyone up for football? 300 Pine is ready

When they reopen early next year, the top four floors of the landmarked, block-filling Macy's building — known to long-time Seattleites as the Bon Marche building — will present a mind-blowing expanse of contiguous space.

Over 300,000 square feet — about 80,000 per floor — will be ready for tenants. Or, if broker Colliers and developer Starwood Capital Group get their wish, one giant technology tenant.

Neither he nor Colliers will discuss leasing terms or potential tenants, but the names he cites as occupying other “adaptive reuse” projects around the country are familiar: Google, Twitter, Facebook and their ilk. (To those we'll add the obvious: Amazon, though it generally prefers its buildings shiny and new.) 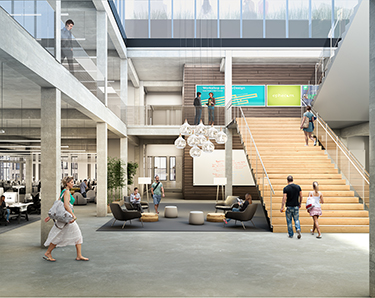 Images courtesy Starwood [enlarge]
The top four floors of the Macy’s building are being renovated to create 300,000 square feet of office space. Light shafts will illuminate the floors, and tenants could add internal stairs.

Starwood Capital spent $65 million last year to buy the top four floors of the Macy's building as a commercial condo. Macy's will remain as an owner on floors one through four, plus the basement. Shopping continues during construction.

Work on the project started last year, with architect CallisonRTKL, contractor Bayley and consulting engineers KPFF on the team.

In addition to the historic appeal, 300 Pine has great transportation links: Walk Score of 99, and Transit Score of 100. But Caven says, “Location is more than just office space — it's part of the culture of the company.”

Or to put it another way, coolness sells. And a recent tour of the construction site suggests what cool, custom-built offices might fill all four floors, or some portion thereof. Colliers broker David Abbott, who shares the listing with Greg Inglin and Laura Ford, led me through the building and up onto the roof.

Size is also being sold here. “There are tech tenants on the market right now that won't consider less than 50,000 square-foot floor plates,” says Abbott.

A regulation basketball hoop hangs in the sales area — appropriate, since the ceilings are over 15 feet high. An entire football field (57,600 square feet) would fit on one floor, allowing employees to huddle on the sidelines — though field goals would be hard to kick. And those concrete columns would hurt when tackled. (Starwood is also adding steel as part of the seismic retrofit.)

Other amenity options for a fun-minded tech tenant could include bowling lanes, shuffleboard, full-court basketball or tennis.

It helps to know that the Macy's building was originally a four-story emporium when built for the Bon in 1929 (and designed by John Graham, Sr.). Four new floors were added in 1953, and passersby can still detect the subtle change in masonry color where the new addition started. The enormous floors were needed to display furniture, housewares, kitchen appliances, apparel and such. Until recently, floor eight was vacant, seven was used for offices, and shoppers could still take the escalators — now removed — to five and six. (I bought a mattress there in 2014.)

A hypothetical floor plan fits 500 people (!) per floor, with generous allowances for meeting, training and coffee areas — plus those bocce ball courts. In theory, a single tenant leasing all four floors could accommodate nearly 2,000 employees. But, as Caven and Abbott both say, they'll happily accept multiple tenants, too. The marketing website is 300pine.com.

Tenants at 300 Pine will enter through a dedicated elevator lobby at the corner of Third and Pine, which will contain a coffee bar, lounge seating, and indoor parking for 100 bikes. Starwood also has a long-term lease on the Macy's parking garage across Third Avenue; both tenants and shoppers will be able to use the sixth-floor skybridge, with elevators keyed for respective purposes.

But 300 Pine's potential is best appreciated on the roof. Callison's showpiece design elements will descend from there: Two sunken light shafts, or clerestories, that will link and illuminate floors eight and seven. Actually, Abbott says, if a single tenant leases the space, it could add internal stairs and link all four floors. Caven even says that a new escalator could be installed for nostalgia's sake. Eighth-floor tenants will receive the additional benefit of 23 smaller skylights.

Up on the roof you can see another strong selling point: the view. It's mostly to the east, though Elliott Bay can also be seen. Even as the city skyline changes, the retail core tends to have more low-rise buildings. Next door to the east, Westlake Center and Westlake Park mean that 300 Pine will always have a nice territorial vista. 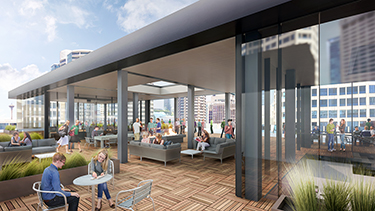 [enlarge]
300 Pine’s rooftop will have an indoor/outdoor lounge where tenants can hang out, entertain, meet and eat lunch.

The rooftop of 300 Pine will have a deluxe indoor/outdoor lounge for tenants, totaling some 20,000 square feet. “A great hangout space,” says Caven, for entertaining, meeting, lunching and mixing — anything to resist “the inertia of sitting at a desk.” Of course there will be Wi-Fi, and also likely fire pits and barbecue stations if the tenant or tenants so desire.

In the modern, wired, open-plan workplace, it's all about fighting the tyranny of the cubicle, and one keyword in our conversation keeps recurring: interactivity. You can't have that in the small skinny towers of yore, much less in the veal-fattening pens that delineated so much of the postwar workplace. (Another keyword? Amenities!)

In the 21st-century market, says Caven, “Our thesis is that most of the existing office inventory doesn't serve what those tenants want to see.” Starwood is actively shopping for other properties like the Macy's building, he says. In San Francisco, he cites Twitter occupying a former furniture mart with 80,000 square-foot plates. In New York, Google has space in an old port warehouse/distribution center with 200,000 square-foot plates. Closer to home, there's the old Sears building repurposed in the 1990s by Kevin Daniels into Starbucks Center (with 130,000 square-foot plates).

Rumors circulated last year that Facebook might be interested in 300 Pine, but the company instead opted to put 1,000 employees into leased space on Dexter, which opened this spring. Google plans to lease four mixed-use buildings that Vulcan will start building on Mercer next year, with 600,000 square feet of space scheduled to open in 2019.

Amazon, of course, has relentless demand for space (8.5 million square feet and counting), and its employees could actually take the streetcar from 300 Pine to the main campus in SLU. Or bike. Or walk. Or ride those annoying Solowheels.

For now, 300 Pine nicely combines size and centrality. Tenants will be able to access the building directly from the transit tunnel. As a model for Starwood's other retrofits of underutilized urban white elephants, says Caven, “It's exactly what we're seeking. The location is almost an equal component to the size.”