Gridiron's groundfloor retail space being sold to a local entrepreneur 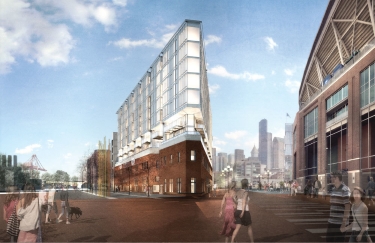 Renderings by Hewitt Architects [enlarge]
Outdoor seating will go on the west side of the Gridiron. 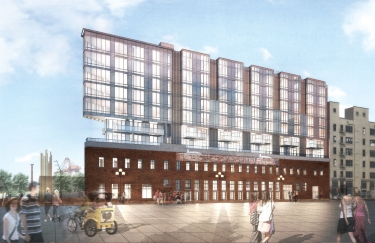 [enlarge]
Dave Meinert is planning four businesses. How the space will be divided, and the mix of food and beverage, have yet to be determined. 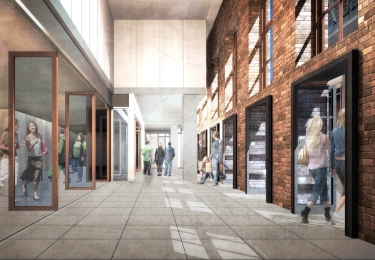 [enlarge]
Jeff Babienko of bARC Architects will do the design

Known for his carefully curated hipster favorites including The Comet, Big Mario's Pizza and Lost Lake, Meinert told the DJC that he bought the retail space in Gridiron, though the transaction and price haven't yet been recorded by King County.

Capitol Hill Seattle Blog first reported the news. No brokers were involved in the deal.

“It's about 10,000 square feet. It's big deal for me,” said Meinert during an interview at his 5 Point Cafe. “We'll put four different businesses in there. ”

Exactly how the space will be divided, and the mix of food and beverage, have yet to be determined. Jeff Babienko of bARC Architects will do the design work.

The flatiron-shaped Gridiron is tentatively scheduled to open in August 2017. Hewitt is the architect, Chinn is the contractor.

Representatives for Daniels said the project is about 22 percent pre-sold, with units being released in phases. It will have about 88 parking spaces above grade.

(Editor’s note: The story has been corrected to say the parking will be above grade.)

The sales office is at 510 Occidental Ave. S., in the Nolo building at Daniels' Stadium Place. The website for the Gridiron is gridironcondos.com.

The Gridiron represents several firsts for Meinert: “It's the first commercial space I've ever bought. It's a big step.” It's also his first business in a new-construction building, and his first foray downtown.

“Part of why Kevin [Daniels] offered space to me is it's very neighborhood-focused,” Meinert said.

Meinert is planning four spaces with different names and identities that he'll announce later. Three will face Railroad Way and one will face Occidental. In general terms, he said the quartet will be “geared some toward neighborhood residents and some to the event traffic” — meaning SoDo sports and convention crowds, possibly including a future basketball arena and team.

Meinert said there are very different demographics in the area — residents as well as visitors: “I think you have to speak to both.” He plans much outdoor seating on the west side of the building.

One of the four businesses will occupy the Gridiron's sharp, south-facing triangular prow, which echoes the nearby Triangle Tavern building. All of his previous businesses have been in older buildings, so being part of reclaiming the long-vacant Seattle Plumbing building holds a special appeal to Meinert.

“I can't express how grateful I am to Kevin,” said Meinert. “Pioneer Square is blowing up.”

The neighborhood has lately seen an infusion of trendy new restaurants, including Matt Dillon's London Plane and Bar Sajor (the latter recently closed).

Looking toward the fall of 2017, “We hope to be open before the Seahawks regular season,” said Meinert, laughing at the typical restaurant opening schedule, “which never happens!”

The two-story 1903 property, aka the Johnson Building, has had a checkered history, with prior development plans known as Stadium Lofts and Stadium Terrace. Daniels and sister company Nitze-Stagen announced plans for the site in 2006. Barrientos then stepped in, buying the property from King County in 2008 for $2.2 million; then came the Great Recession.

Control reverted to financial partner Lakeside Capital Management in 2011. A report in The Seattle Times said Lakeside was ordered closed by the Securities and Exchange Commission, owing to charges of financial mismanagement, in July 2014 — precisely when Daniels announced new plans for the site.

King County lists the current owner as Gridiron Investors LLC, which shares an address with Daniels.