On the Block: The Publix shows the ID's past and future

Miye Moriguchi is understandably proud of the Publix, a 125-unit apartment and retail complex with both new and renovated components that had its grand opening yesterday, with Mayor Ed Murray and other dignitaries in attendance.

She is a bubbly third-generation member of the family that founded Uwajimaya in 1928, and serves as Uwajimaya's development manager.

On Tuesday we toured the renovated historic hotel and new building connected to it.

The Publix sits at 504 Fifth Ave. S., on a block bounded by South King and South Weller streets that is owned by Moriguchi LLCs. It faces Vulcan's headquarters, close by the transit tunnel and King Street Station, in a neighborhood suddenly experiencing a surge in transit-oriented design.

As we stand on the seventh-floor roof deck, looking down at the swarm of commuters arriving via rail, bus and streetcar from Capitol Hill, Moriguchi says, “The trains have always been here.”

To the west is Kevin Daniels' Stadium Place. South are the stadiums. North in Pioneer Square, you can see the top of Greg Smith's 200 Occidental, where Weyerhaeuser will move its headquarters next month. The neighborhood is booming. And yet, to the east is a whole lot of nothing. The historic Chinatown-International District is predominantly low-rise and undeveloped, with open sky as you look up Jackson. (On the plus side, for sports fans, there's lots of parking — but maybe not for long.) 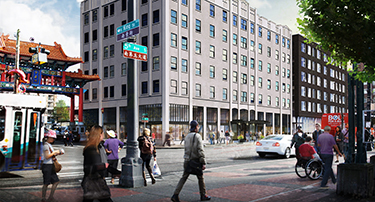 Images courtesy of Uwajimaya [enlarge]
The Publix is a 125-unit apartment and retail complex. The old Publix Hotel, shown here in the center, was renovated and a new structure was built next door.

Though Moriguchi and colleagues prefer to talk about the Publix, that project — and the likely future development of adjacent Uwajimaya parking lots — are part of the same Seattle conversation about growth, transit and urban density. South Lake Union will eventually run out of parking lots and teardowns to develop as apartments. If the city's proposed Center City Connector streetcar on First Avenue eventually links the SLU and Capitol Hill lines, young tech workers could have a seamless commute north from the ID by 2019.

The historic, six-story building in the Publix complex faces Fifth and King, and dates to 1928. It was built as a single-room occupancy hotel for predominantly Asian workers, and had been empty since it was vacated in 2003.

After the renovation and new addition, the complex opened to residents on Aug. 1, with 125 apartments and 12,000 square feet of retail space. The apartments are now about 60 percent leased, says Moriguchi.

Unlike many local developers who are eager to sell to institutional investors as quickly as possible, her family plans to keep the property, as it has done with most of its holdings in the ID. One exception is a parking lot two blocks north that the family sold for $5.5 million in January. 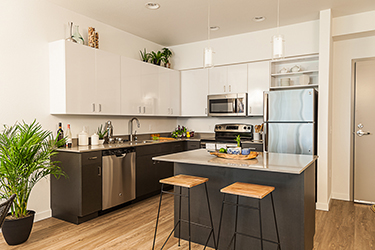 Under the renovation scheme, the 120 original SRO rooms were reconfigured to create 60 larger units, though all of the original SRO doorways have been preserved as inoperable reminders of the past. The exterior, hallways and lobby of the old structure are also preserved and restored.

Units in the old building are mostly studios and one-bedrooms — and are smaller than those in the new L-shaped structure that has been built to the south. Both structures are six stories and connect at the ground level and on the second floor — though the latter is for residents only.

There are 65 larger apartments in the new structure, which faces Fifth and Weller. It seems much more contemporary and Ikea-ready, with wider halls and more modern kitchen sizes. The units also have individual washer-dryers, while all tenants in Publix can use a basement laundry room and other lounges and amenities, including the roof deck. There are 26 underground parking spaces.

Total project cost is estimated at around $24 million. Market-rate rents run between $1,175 and $3,400. Unit sizes range from 312 square feet for studios to 1,120 square feet for three-bedrooms. Twenty five of the units are income-restricted for 12 years as part of the city's Multifamily Property Tax Exemption program.

Moriguchi doesn't want to speculate about the demography of new residents, but everyone glimpsed in the hallways is young. An Amazon Prime box outside one door seems a sign of generational change — and a lowering of the median age in the ID.

Though smartly designed and cheery, the Publix is scented by more than the smell of fresh-dried paint. The new structure was built on the site of the old Uwajimaya store and Moriguchi points out visible signs of that history. For example, one retail storefront is oddly raised a few feet from sidewalk level because, says Moriguchi, “This was the old loading dock” for the old store.

The current store, built in 2000, is Uwajimaya Village, which includes 176 apartments.

The lobby in the old Publix Hotel has been handsomely restored and shows its original use and cracks in the tile mosaic floor. “It's just as it was,” says Moriguchi — only with modern mailboxes and possibly Wi-Fi to follow.

What other changes are coming to the ID? Last year, the Woo family announced tentative plans for 84 new apartments in the fire-damaged and vacant Louisa Hotel, at 669 S. King St.

The International Special Review District has been presented with several recent proposals. They include: a new seven-story, 160-unit mixed-use building at 525 S. Yesler Way; an 11-story office tower at 831 Seattle Blvd. S.; and a new six-story, mixed-use building with almost 250 units at 913 S. Jackson St.

A planned expansion of Asian Plaza at 1032 S. Jackson St. is outside the historic district, but would add 240 apartments along the streetcar line.

With the proposed City Connector streetcar, and Sound Transit 3 on the ballot this fall, the ID will be more connected to the region than at any time since Interstate 5 effectively bisected the neighborhood in the early 1960s.

Before that, the neighborhood suffered a catastrophic loss of identity when Japantown was gutted by Executive Order 9066, which sent many residents to internment camps in 1942 — including Uwajimaya founder Fujimatsu Moriguchi and his family. The Publix nicely capitalizes on that history.