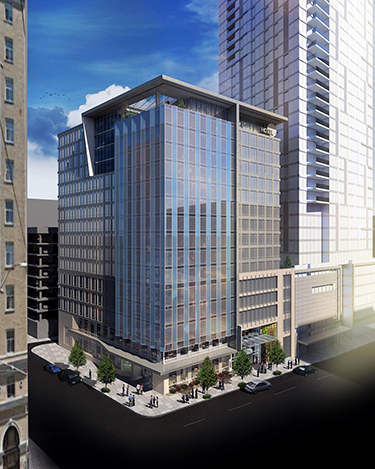 Image courtesy of Skanska USA [enlarge]
The 229-room Charter Hotel will be operated by a Hilton luxury brand called Curio.

Widewaters Group of Syracuse, New York, is the developing the 229-room hotel.

The property will be called The Charter Hotel and operated by Curio, a Hilton luxury brand that bills itself as “a collection of independent, remarkable hotels whose only unifying characteristic is their glorious individuality.”

Hogan Campis Architecture of Atlanta is the architect.

The hotel will have a 3,300-square-foot restaurant, 5,000 square feet of meeting space, and a top-floor lounge and outdoor terrace.

The tower will share a half-block site with a 40-story Equity Residential apartment tower now under construction that is scheduled to open next year. Construction will take place above an existing parking structure that will be used by both buildings.

Ed Shagen, Widewaters' vice president for the western region, told the DJC last year that his firm had been working with Equity Residential on the development since 2013. The northern half of the parking structure was designed for the hotel.

Turner Construction is the general contractor for the Equity Residential project.

Construction is scheduled to finish in February 2018.