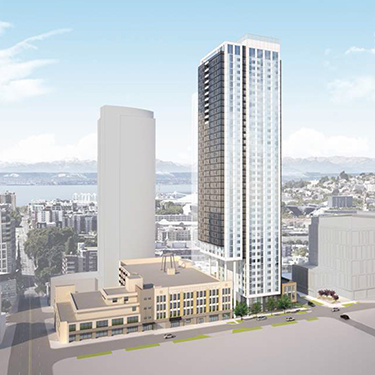 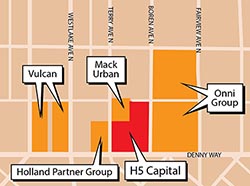 On Wednesday, developer Seattle H5 Capital and VIA Architecture will show images of the latest design for a mixed-use tower at 121 Boren Ave. N.

Two towers were once proposed for the 40,000-square-foot site, but the current design calls for a single tower of 41 stories, with 436 apartments, 1,800 square feet of retail space and parking for 244 vehicles in seven levels below grade.

The tower's most striking design element would be on the south side, where the structure would be supported by four slender white columns over a breezeway. This would allow it to overhang slightly above the building now on the south end of the block, which is currently occupied by The Seattle Times. That structure will remain on the block with Seattle H5 Capital's new tower, but the 13 Coins restaurant building will be demolished.

Seattle H5 Capital only owns about three-quarters of the block. The northwest quadrant (facing the dead-end of John Street) is owned by Mack Urban, which is planning a rival tower at 1001 John St., with 43 stories and 404 apartments.

The two towers would be separated by just 33 feet from approximately the fourth through seventh floors, and by 46 feet above that level.

Such close spacing is contrary to municipal code, which requires 60 feet between towers, but the two developers have asked the city for an exemption.

H5 acquired the property from The Seattle Times in 2011 for $36 million. The Times also separately sold two blocks to the east of H5's site to Onni Group in 2013 for $62.5 million.

The historic facade of The Seattle Times' former headquarters on Fairview and John will be preserved as part of the new development Onni Group is planning for those blocks.

No significant changes have been reported since last spring for Onni's two projects: at 1120 John St. and 1120 Denny Way. Onni has proposed four mixed-use towers on the blocks, with as many as 2,000 units of apartments and/or condos.